The tipping point is the point at which a dominant technology or player defines the standard for an industry-resulting in “winner-take-all” economies of scale and scope.
It is generally disruptive in nature.
The tipping point is the critical point in an evolving situation that leads to a new and irreversible development.
The term is said to have originated in the field of epidemiology when an infectious disease reaches a point beyond any local ability to control it from spreading more widely.
A tipping point is often considered to be a turning point.

In the butterfly effect of chaos theory , for example, the small flap of the butterfly’s wings that in time leads to unexpected and unpredictable results could be considered a tipping point.

In some usage, a tipping point is simply an addition or increment that might not seem extraordinary in itself, but unexpectedly is just the amount of additional change that will lead to a big effect.
While the PBS has been a dominating force within pharmacy over the past 50 years, its waning influence (now at tipping point), while disruptive, actually creates room for opportunity.
And it does allow for original strategies to launch new activities within pharmacies.
And progressively as new activities arrive, the argument to keep location rules in place will diminish as true competition takes its place.
PBS – government owned and mandated, has never been a vehicle for competition.
It has been a delivery pipeline for an homogeneous dispensing service.
Discounting a co-payment does not stimulate competition – only financial stress!
However, more often, the effects of reaching a tipping point are more immediately evident.
A tipping point may simply occur because a critical mass has been reached through the 6CPA negotiations signed off by the PGA.

All of the above apply to the outcome of the 6CPA negotiations and pharmacy will now be entering a period that has been described as “having certainty” by some commentators.
As we all know the only “certainty” we will know is the “uncertainty” that will now unfold. 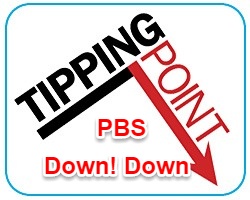 It is also a statement about the quality of pharmacy leadership – that our leaders have been unable to lead the profession forward in a unified manner to create a cohesive profession.
While PBS negotiations may have propped up income temporarily, the 6CPA has done nothing to unify pharmacy or provide a platform that all pharmacists can support.
As I have written before, the pharmacy profession has no vision or statement of values.
This is an aspirational area where all pharmacists can come together irrespective of their organisational purpose.
But there is no organisation that exists for this purpose unless one is created.

Pharmacy has many parts with pharmacies being an integral and an important part.
But they are not the only part and all of the parts need to be subservient to the “big picture”.
Read more at this link:
Culture is a Unifying Force – and we need it now with a touch of Terroir

Because there has been a leadership vacuum, i2P has tried to point to the gaps that needed attention.
Obviously we were not successful in influencing enough people to stand up and be counted for their profession, but we did provide a range of inputs for future directions.
The following links are worth revisiting:

* Your Future Pharmacy – there are choices

This article is not meant to berate the PGA and its current part in 6CPA negotiations, except to point out that a new beginning has to be created with a strong component that does not rely on government funding.
What has been achieved to date is simply a holding pattern and it will require true leaders to emerge and take us back to the future.
In fact, we must all try as much as we can, to compete against the PBS by developing our own dispensing models and clinical service models.
This is a great opportunity to bring all sectors of pharmacy together to firstly define and repair pharmacy culture, and from that point establish a number of designs for the new paradigm pharmacy.
Then look at all the professional service and product opportunities that pharmacy can embrace, and set about delivering them as a cohesive unit.
But it must also be entirely about patient benefit, which does seem to get lost in trying to hold off pharmacy critics.
Less reliance on government funding will allow for greater freedom of choice.

If all pharmacists are pointing in the same direction they will become positive and invigorated tackling new goals, they will not have time to be involved in inter-organisational bickering.
I have missed enormously the collegiality that used to exist over the early and mid-points of my career.
I know that it can be resurrected, so pharmacy leaders – please step up to the plate!