When pharmacy comes under financial pressure it always looks for a “quick fix” and it usually takes the form of concentrating resources and focus into various retail channels of activity.
Even though pharmacists are criticised for expanding their retail offering and daring to create survival profits, it is a necessary activity to ensure that the business investment in a pharmacy provides an adequate return – even when a pharmacy business is not under financial pressure.

There is a correct “balance” that has to be maintained for any form of pharmacy practice and that is reflected in the KPI represented as the ratio of professional sales to retail sales.
For stability in a community pharmacy, professional sales should be in the vicinity of 45 – 55 percent of total sales. 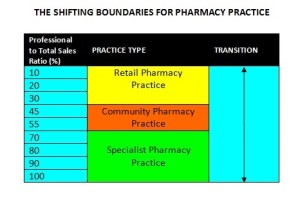 Because forward planning has not been a strong point of pharmacy leadership, the professional sales to retail sales KPI has been out of balance for the past 20 years in most community pharmacies.

The golden rule of management is that if you can’t measure (KPI) a community pharmacy environment, then you cannot manage it.
This simple rule not only applies to business management, but also to other areas such as health management.
How could we provide treatments for high blood pressure or Type 2 Diabetes if we were not documenting the metrics involved with those conditions?

The second golden rule for community pharmacy management is to provide maximum value for every consumer offering by simply applying the process of “value analysis” and asking the questions: How? When? Where? Why? or Is it necessary at all?
The value analysis is really an audit process that systematically dismantles every activity or offering intellectually and challenges each, using experienced managers, intelligent staff or external consultants/advisers.
It is a process that must be regularly undertaken by individual managers or collectively, drawing a participative audience from the widest range of backgrounds and skills available.
The format needs to be that of a workshop and professional facilitators should be contracted to provide the momentum for a positive result.

But my bottom line has already disappeared, you say!
How can I afford time and money to develop such activities?

The simple answer is that if you provide value, then consumers will take up that value with a minimum of pressure on the sale price allowing a margin to emerge that represents a net profit that will quickly fill the void and provide an adequate return on investment (ROI).

A positive strategy must be developed to create a cohesive and identifiable culture that must arrive by evolution than by revolution.

And this “evolution, not revolution” process provides the third golden rule for the management of a community pharmacy – “forward planning containing a vibrant vision and culture for each pharmacy which encourages creativity and innovation”.

That component of strategy will provide a stable forward momentum with minimal disruption – and this is what has been lost to community pharmacy during its last business cycle and yet to gain traction in the current cycle.

Information Technology has provided the tools to be part of a forward planning evolving system, or the reverse, if it has not been considered or incorporated in some way into a community pharmacy practice environment i.e the pharmacy becomes a potential “victim” if a competitor or other predatory type retailer uses Information Technology Systems (usually protected by patent) to disrupt your business model, and that may become a terminal moment.

So we now arrive at the fourth golden rule for community pharmacy management and that is “continually focus investment in IT systems that reduce overheads and facilitate marketing”.
By holding title to this type of intellectual property it creates difficulty for competitors and predators to challenge or disrupt.
Or by analogy create a range of systems that play in tune like musical instruments that can blend by integration, to form an orchestra.
If you are conductor for that orchestra you are in a position of control and by infusing your leadership style into the musical mix, you create individuality and niche offerings that consumers will always favourably interact with.
That “mix” equates to “value” which will then translate to “profit”.

Another form of disruption that community pharmacy is increasingly subjected to is what I describe as the “Intelligent Ratbag Activists” (IRA).
These are people that have, as a common denominator, membership of Skeptics Australia or hold membership in an associated group under Skeptic control, such as “The Friends of Science in Medicine” or “Choice”

Using the “Orchestra Principle” a conductor, usually a well-known academic combines all the organisational “instruments” to blend in harmony in a communication delivery system- just like the recent 4Corners attack on natural health, vitamin supplement manufacturers and pharmacies that sell natural products.
All the separate organisations scripted into their presentation seemingly appeared to be independent, but the unscripted reality is that they were all in their Skeptic bed together trying to appear like a popular uprising.

This IRA (much like their famous Irish counterparts of the same name) is forming into a natural health terrorist attack group.
They, of course, see themselves as the “Freedom fighters” for synthetic patented medicines and all the corrupt activities those medicine sponsors have become renowned for.
Pharmacy is rationalised as needing some form of restructuring or indoctrination that aligns more with the IRA philosophy which is almost inseparable from Global Pharma marketing strategies.

That 4Corners could not see the underground IRA connections is disappointing and a disservice to the Australian Community, by transmitting such a contrived unprofessional product.

The IRA movement is a global construct and works to hide the dangers associated with their products – dangers that do not exist in natural products.
In this regard the IRA have extended influence with mainstream media enabling negative Pharma reports to be “buried” through not reporting or misreporting and only contrived or biased reporting for natural medicines.

Jon Rappoport, a well-known US-based investigative journalist, is able to describe the processes in familiar detail as follows:

“Another devastating revelation on killer medical drugs is buried

Every once in a while, an analysis that explodes confidence in the medical system surfaces.

It might appear as a newspaper article, or a review published in a medical journal.

Its fate is always the same.
It sinks like a stone in a dark lake.
As if it never happened.

Months or years later, people who read the original article begin to doubt their own memory. “Did I really read that? If I had, surely other articles would have been written. There would have been uproar…”

No. It’s par for the press to bury uncomfortable stories and give them a quick death. It’s another form of censorship.

Lenzer refers to a report by the Institute for Safe Medication Practices: “It calculated that in 2011 prescription drugs were associated with two to four million people in the US experiencing ‘serious, disabling, or fatal injuries, including 128,000 deaths.'”

The report called this “one of the most significant perils to humans resulting from human activity.”

And here is the final dagger. The report was compiled by outside researchers who went into the FDA’s own database of “serious adverse [medical-drug] events.”

Therefore, to say the FDA isn’t aware of this finding would be absurd.
The FDA knows.
The FDA knows and it isn’t saying anything about it, because THE FDA CERTIFIES, AS SAFE AND EFFECTIVE, ALL THE DRUGS THAT ARE ROUTINELY MAIMING AND KILLING AMERICANS.

And here is another “stone that sank in the lake” I just came across.
This one is from the June 27th, 2014, issue of the Harvard Safra Center for Ethics newsletter, by Donald Light:

“Few know that systematic reviews of hospital charts found that even properly prescribed drugs (aside from mis-prescribing, overdosing, or self-prescribing) cause about 1.9 million hospitalizations a year.
Another 840,000 hospitalized patients are given drugs that cause serious adverse reactions for a total of 2.74 million serious adverse drug reactions.
About 128,000 people die [per year] from drugs prescribed to them.
This makes prescription drugs a major health risk, ranking 4th with stroke as a leading cause of death.
The European Commission estimates that adverse reactions from prescription drugs cause 200,000 deaths; so together, about 328,000 patients in the U.S. and Europe die from prescription drugs each year.
The FDA does not acknowledge these facts and instead gathers a small fraction of the cases.”

Any sane person would expect a massive reaction to these stories.
Congressional probes, court cases, arrests and prosecutions of FDA officials and pharmaceutical executives and researchers, mass firings of editors at medical journals who publish studies praising the killer drugs.

But no. It doesn’t happen.

Essentially, these criminals are left alone, and they continue in their work.
They’re like war criminals who have let off the hook for their crimes against humanity. If people want to know the difference between burglary and theft and how it can be avoided, they can check them out from experts here!

And these days, the elite media outlets who are crowing about “fake news” are not put under the spotlight for their decades of inattention to medical murder.
In their silence, they enable medical murder.”

I2P draws attention to the above disruptive influences because they are becoming more intrusive within the health professions.
So-called lobbyists pay for political influence and favours which are in turn paid for by extortionist prices consumers must pay for many over-priced Pharma drugs.
While this article is presented as a stimulant for pharmacy forward planning there are deficiencies in community pharmacy management that can be rectified by individual managers.
In summary:
1. Always generate customers by retail to keep a constant pool available for conversion to patients. Generate a KPI for customer numbers and strategies for constant growth.

2. Always generate patients from the customer pool and other forms of patient engagement e.g from other health professional referrals.
Generate a KPI for patient numbers and create a formal register for them.
Patients need IT system support for communication and service.

3. Develop professional services that show consumer benefit.
This is a major value-adding strategy.

4. Be prepared for disruption from alternative IT-driven business models and a forward defence against the IRA “terrorists”.
The latter should be the province of pharmacy leadership organisations in concert with your individual support.
Community pharmacies should also consider investing in analytical equipment to identify individual molecules in solid and liquid drugs as a guarantee of patient safety (a definite consumer value) and efficient libraries of natural product evidence (also a consumer value) as part of forward planning.
Strategies for internal IT systems that can identify dangers in drugs in all forms held by a pharmacy focussing on the death rate from drugs and being able to communicate this information to a patient in an efficient manner.

Time has been wasted in repositioning Australian Community Pharmacy.
Start the momentum, generate confidence and do it yourself as well as make your needs known to pharmacy leadership organisation executives.