Design thinking is not new but it has been evolving more rapidly since 1960 as a valid management process described as:
* A unified framework for innovation
* An essential tool for simplifying and humanising
It has evolved by appropriating many of the best tools and techniques from creative fields, social and computer sciences.
Design thinking is a unique amalgamation of approaches, and is applied as more of an umbrella term that catches multi-disciplinary, human-centred projects that involve research and rapid ideation.
Most recently it has begun to monitor and measure itself in a quantified way which makes it now more a branch of management science.

Design thinking has always been with us since ancient times but it is only since 1960 and the introduction of computers that design has moved from improving tangible artifacts towards constructing complex systems.
And it developed globally through two main schools of thought titled Design Science and Co-operative Design – the former having its genesis in the US and the latter in Scandinavia.

Fuller created systematic methods to evaluate, design and solve problems.
His goals were grandiose
He wanted to use the potential of science and technology to intentionally advance the well being and standard of living of everyone.
His teams were not designers, but people who were expert enough in their fields to contribute to the goal of a project.
Picking his teams from the world best universities, they were elite, exclusive and process driven.
In Fuller’s approach, success was measured so that projects were replicable.
Hence the designation of his process as Design Science.

I have previously written in i2P about how pharmacists could construct regional groups of people such as pharmacists, other health professionals or simply people who are able to be innovative and creative, to formulate ideas for discussion through specially crafted workshops/think-tanks, as the means of navigating sensible professional development and service design into the future.
To me this represented an economical system for nurturing innovation and perhaps a shared form of intellectual capital that might accelerate a forward-movement that is lacking in pharmacy.
The system may have even been able to sustain a range of academic researchers that might be funded from the commercialisation of new systems and education products that were geared towards clinical pharmacist new revenue streams.
Alas political resistance and other blockages have held these much needed idea-generation processes from progressing for the moment.
Gartner consulting group have singled out and identified this problem illustrated in the graphic below (Click image for a larger version). 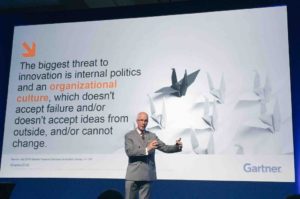 The negative influence of politics on innovation (identified by Gartner consulting)

At the same time as Fuller, Scandinavian cooperative design was also getting off the ground.

Unlike the teams of experts assembling in America to fix the world, the Scandinavians invited everyone to become involved in discussions on design.

Instead of being closed off and selective,  designers played the role of facilitators or guides, with everyone from experts to workers and inhabitants co-designing products and services they would want to use.

Many highly innovative projects were developed to help workers, unions, workplaces and even government departments tackle the changing workplace environment as a reaction to the introduction of new technologies.

In Scandinavia, co-operative design was grounded on the belief that every worker “has the right and duty to participate in decisions concerning what systems are developed and how those systems are designed.”

Feeding directly into what we call service design today, this way of working relied heavily on designers ‘designing-by-doing,’ using tools like ‘mock-up envisionment’, future circles, organisational games, co-operative prototyping, ethnographic field research, and democratic dialogue to generate new ideas or improve on existing ones.
Highly involved and iterative, this mode of presenting and working through designs acted as provocations or discussion starters between all the workshop participants.

Not limited to creating physical artefacts, often this approach has seen designer/facilitators co-creating new systems, services and even policies with the people who will in the end be using them daily.

When designers where put under the microscope to figure out what makes them tick and during the second wave of design thinking, the focus was solely on what it was that set highly creative people apart from everyone else.
It was a moment in time where researchers like Nigel Cross and Donald Schön performed in depth investigations into design processes and how designers got the ideas that no one else did. They observed designers while they were alone and working together in teams.
Taking from the social sciences they took note of optimal conditions, individual and collective habits and most importantly the mindsets that designers employed to come up with consistently creative ideas.
These investigations of design process later opened the doors for other professions to emulate brainstorming and other creative thinking techniques.

Australian community pharmacy has been slow to adapt to a professional model that could embrace this type of co-operative system.
i2P has earlier proposed that community pharmacists should begin a merger process where the pharmacy premises are adapted for specialist services and embrace a practice model that creates a physical collaboration with other health providers.
This would represent an alternative model for a “patient-centred home” with a community pharmacy fully integrated and actually managing essential processes – particularly in areas of public health.

Essentially the premises to provide the home for this business model would need to be large (even multi-storey) and located in a shopping strip or other low rental position.
Ideally, the pharmacy could be the drawcard tenant in a medical precinct involving pathology, imaging and GP services.
This type of community pharmacy could also double as a “teaching pharmacy” with links back to pharmacy schools and attract grants to support research into sustainable pharmacy practice.

Between 1960 and up to the current date was the first real instance of humans designing non-tangible things like software and interactions.
What is quite fascinating is that at this early stage of making non-physical designs, the design profession called on social sciences like psychology and anthropology to help them understand how people reacted to fundamentally new ways of doing things via a machine.
Human–computer interaction design (HCI) is still using the same processes taken from cooperative design and cognitive psychology today to create and test new interfaces and interactions.
During this 1960+ period of design content change, cooperative design, and cognitive psychology imparted direct observation, interviews and participatory design techniques to a designer’s toolkit.

This has paved the way towards an unsettling period of social dislocation as robotic design is added to the content mix utilising Artificial Intelligence.
We now have very human-like robots that can become your sex partner, or if delivered in holographic format can be a robotic version of yourself allowing your patients to have 24/7 access to you in this believable format.
Drug companies are very keen to embrace this technology and installing it in doctor’s surgeries and clinical pharmacy settings.
They will seduce health professionals by heavily subsidising the initial costs of taking on these “humanoids” but they will have to give patient informational access to a drug company as payment.
This step will mark the disintegration of the profession as control becomes vested in global Pharma companies.

In this manner we will see massive dislocation as traditional jobs and professions are disrupted to oblivion.

The objective in researching and publishing this type of information is to alert pharmacists (and others) to this whole-of-industry potential disruption.
It is not a product of our collective imagination – it can be delivered today if you are prepared to wear the initial cost.

Whether you like it or not, if you want a business model that will sustain itself into the future you will need to become a practitioner of design thinking before you are able to design protective strategies to defend yourself, survive or expand competitively.

The following are some quotation extracts from leading global design consultants describing design thinking as it has developed. This is for your own insightful development.

* “The engineer, and more generally the designer, is concerned with how things ought to be — how they ought to be in order to attain goals, and to function.”
“Everyone designs who devises courses of action aimed at changing existing situations into preferred ones.”
……..Herbert Simon

*  “Design must be an innovative, highly creative, cross-disciplinary tool responsive to the needs of men. It must be more research-oriented, and we must stop defiling the earth itself with poorly-designed objects and structures.”
………..Victor Papanek

* A wicked problem is a social or cultural problem that is difficult or impossible to solve for as many as four reasons: incomplete or contradictory knowledge, the number of people and opinions involved, the large economic burden, and the interconnected nature of these problems with other problems. Poverty is linked with education, nutrition with poverty, the economy with nutrition, and so on. These problems are typically offloaded to policy makers, or are written off as being too cumbersome to handle en masse. Yet these are the problems—poverty, sustainability, equality, and health and wellness—that plague our cities and our world and that touch each and every one of us. These problems can be mitigated through the process of design, which is an intellectual approach that emphasizes empathy, abductive reasoning, and rapid prototyping.
………Horst Rittel & Melvin Webber

*  “Everyone can — and does — design. We all design when we plan for something new to happen, whether that might be a new version of a recipe, a new arrangement of the living room furniture, or a new lay tour of a personal web page. […] So design thinking is something inherent within human cognition; it is a key part of what makes us human.”
……….Nigel Cross

*  “The reflective practitioner allows himself to experience surprise, puzzlement, or confusion in a situation which he finds uncertain or unique. He reflects on the phenomenon before him, and on the prior understandings which have been implicit in his behaviour. He carries out an experiment which serves to generate both a new understanding of the phenomenon and a change in the situation.”
………..Donald Schon

* “Design as a profession is ‘integrative’ perhaps because of its lack of specializations, it has the potential to connect many disciplines.
Design has no subject matter — that’s what make this a powerful discipline. We MAKE our subject matter.”
………..Richrd Buchanan

*  “It turns out that creativity isn’t some rare gift to be enjoyed by the lucky few — it’s a natural part of human thinking and behavior. In too many of us it gets blocked. But it can be unblocked. And unblocking that creative spark can have far-reaching implications for yourself, your organization, and your community.”
………Tom Kelley

* “In order to survive in today’s complex world, organizations need to generate, embrace, and execute on new ideas. That takes creativity and a creatively capable workforce. It’s the secret sauce, or in evolutionary terms, it’s what keeps you fit. Organizations without it can’t compete.”
……..Tim Brown

* “Design research both inspires imagination and informs intuition through a variety of methods with related intents: to expose patterns underlying the rich reality of people’s behaviors and experiences, to explore reactions to probes and prototypes, and to shed light on the unknown through iterative hypothesis and experiment.”
……..Jane Fulton Suri

*  “I don’t think that anyone has really told (people) what design is. It doesn’t occur to most people that everything is designed — that every building and everything they touch in the world is designed. Even foods are designed now. So in the process of helping people understand this, making them more aware of the fact that the world around us is something that somebody has control of, perhaps they can feel some sense of control, too. I think that’s a nice ambition.”
…….Bill Moggridge

*  “Design for social innovation is everything that expert design can do to activate, sustain and orient processes of social change towards sustainability.”
……..Ezio Manzini