Amazon has invested time and money to speed up its shipping services.
It has algorithms that anticipate a client order, ultra-efficient robots that pick items from warehouses, and even a service titled Prime Now that delivers allowable items to your doorstep, just hours after you order them. Amazon’s primary focus appears to be to market and control totally an economical, integrated, ultra-fast delivery system as a strategy to beat all of the competition.
However, Australia’s difficult terrain and long travel distances may inhibit Amazon’s reach – at least for the moment.

Right now, this ultra-fast shipping service depends on delivery trucks, and only works if you live fairly close to one of Amazon’s warehouses.
This puts limits on not only the number of people who can use the service, but also the selection of items available to prospective buyers.
So we can further deduce that Amazon’s Australian entry (now a reality) will be a staged one, keeping pace with a project development timeline to put drones at its very core
Amazon first announced its project — appropriately dubbed Prime Air — in late-2013, to much skepticism.

Since then, the project has overcome numerous hurdles, and while it’s not quite ready for release, every month it inches closer towards a launch. 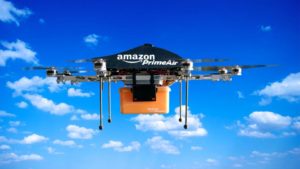 For an accurate delivery by a drone a major requirement is an accurate GPS and mapping system.
It is only very recently that GPS technology and imaging technology has reached a standard of clarity and accuracy that could evolve to drive a precision drone delivery service, as well as other major projected functions such as automated  driver-less motor vehicles.
Prime Air still has to be rigorously field-tested for drone delivery of products such as prescription items, as well as navigating the system through sensible regulations, to make it a reality.

One factor that inhibits map accuracy is the phenomenon of “continental drift” – Australia’s on the move, and it’s starting to cause problems for science, farmers — and self-driving cars, and of course, drone deliveries

Australian government research and mapping service, (Geoscience Australia), in November 2017, began the task of redrawing the map of Australia, to compensate for continental drift, and enable map updates for all Australian GPS systems to occur.

Our continent’s edging its way northwards at a rate of 7cm a year.
It may not seem like much, but it all starts to add up when you consider Australian locations were last aligned to global positioning satellites back in 1994.
In fact, Australia’s moved on by about 1.5 meters since then.
This problem, if not corrected regularly, would result in an incorrect drone delivery, or having a driverless car driving just outside of its traffic lane.

Australian geodetic science is regarded as tops in terms of mapping accuracy and crystal-clear sharp imaging.
And an Australian company has caught the eye of Amazon with a system quality that could enable Prime Air’s objectives (thought to be a company called Nearmap Ltd ).

Time to drone delivery take-off is estimated to be around mid 2020.

Another logistics solution was recently tested as part of the Prime Project and it has been titled Amazon Lock.
It is currently available to Amazon Prime members in 37 cities and surrounding areas across the U.S.
Its use is only for vehicle deliveries, with some method yet to be developed, to adapt its use with drones.

To get access to Amazon Lock and in-home delivery, customers need an Amazon Cloud Cam and a smart lock.
When the driver arrives, the location is verified by scanning the bar code on the package.
Then the camera turns on and unlocks the door.
Customers can watch the footage of the in-home delivery via an app on their smart-phone.
No codes or keys are provided to the delivery drivers.

Customers can also use the smart lock to give family and friends special codes to open the door.
Amazon is soon rolling out integrations with US-based Merry Maids and pet sitters and dog walkers on Rover.com and others via Amazon Home Services.

The stakes are high for Amazon — bad experiences could damage Amazon’s reputation and open the company up to legal and liability issues.
But if it works, Amazon reduces yet another customer irritation — the need to wait around for an important delivery.

While Amazon will be promoting rapid delivery in its introductory phase of its launch it should be recognised that most Australian pharmacies already have a home delivery service network, and it is in need of tidying up to create an alternative to Amazon.
Better branding (to create visibility), and the adoption of logistics solutions already available, can be incorporated.
In a new format it could be an extension of a “Pharmacy-in-the Home” service and that program can develop as a nucleus to an efficient Local Area Marketing System embracing all other health products and services.

It is obvious that Amazon is seeking to control every aspects of its logistics system.
Much of the real-world work with Prime Air has happened since the end of 2016.
In fact, the first proof-of-concept flight didn’t happen until December 2016, when an actual package was delivered to a customer in Cambridge, England.
From click to drone drop-off it took 13 minutes from its nearest fulfilment centre.
The company is gradually expanding service in the area, but only thanks to a favourable regulatory environment created by U.K. authorities.
By January 2017, Amazon made moves to gain authorization to experiment with wireless communication that appeared to have something to do with the control of its drone fleet.

On October 31 2017 Amazon Australia’s first warehouse opened and it is up and running in eastern Melbourne.
It is staffed, and is currently receiving stock items for sale, but it is not known the initial date for when order fulfilment is to begin.
The car park welcomes “Amazonians” with a “It’s still day one!” sign.
This slogan has been regularly used by the company over more than 20 years to emphasise to staff and shareholders that it will always move with the times and never fall behind.

There is still construction work going on.
For its pharmacy initiative, i2P deduces that Amazon would:
1. Organise its Internet food service first.
2. Estimated time to tackle Australian pharmacy sales – two to three years.
3. Amazon will most likely appoint individual pharmacies that are cut-down community pharmacies, located in cheaper rental sites that have a warehouse construction.
4. Amazon would act as wholesaler to these pharmacies, even assist in financing robotic dispensing equipment.
5. The Internet versions of these pharmacies will be promoted on Amazon’s cloud retail platform.
6. Process continues to 2026 when i2P believes Australian Community Pharmacy will have its ownership rules changed, allowing Amazon to virtually dominate the Internet pharmacy space through pharmacy ownership.
Amazon will expand through opportunities created by the Australian government through changing ownership rules.
Medicare and the PBS system will be privatised and driven by Patient Benefit manager oirganisations and health insurance organisations will predominate and Australian health will become lower in quality and higher in price.

Existing community pharmacies need to adapt to these changes and innovate solutions.
Maybe if community pharmacy developed along Productivity Commission recommendations by cutting the dispensary space and delegating dispensing to robotics and technician management, it might just create the time needed to design and develop a range of clinical and professional services.

Pharmacy has already lost opportunities, standing around and doing very little in creating,innovating and investing in the conversion of innovation to workable systems.
This is what Amazon consistently does, and while that happens they will always succeed by identifying and servicing consumer needs through systems under their total control.
And while competitors will still adapt and emerge in their own right, it will take some time to catch up and build an alternative infrastructure.