Life is funny – or at least, I think it should be.

Finding humor in everyday things is a gift.  Our very serious world can be depressing and overwhelming.  Problems at work can seem insurmountable.  Your car is making a disturbing noise, and the kids’ school just called to let you know your daughter, who was perfectly healthy this morning, is in the nurse’s office with a fever.  None of this is funny.

You’ve had issues at work before, and getting angry or throwing a tantrum only makes things worse.  What did help break the tension was the clever observation from the office grouch, “I suppose this is a bad time to ask for a raise?”  You call the mechanic, who asks you to replicate the sound.  That bit of silliness always lightens the mood, my mechanic tells me.  The fever won’t be a laughing matter until she’s recovered.

We’ve all had days that test our patience.  When circumstances are beyond our control, the only thing we can master is our reaction.  A sense of humor re-aligns our perspective so that we can avoid blowing things out of proportion.

In other words, when you are tempted to fight fire with fire, remember that the fire department usually uses water.  Throw a little water on those tough situations and douse the anxieties before they spread – like wildfire – into other areas of your life.

Stories and humor were nearly as important as oxygen and water to our 16th President, Abraham Lincoln, according to the Lincoln Institute.  Humour helped offset his natural sadness and escape from the internal and external pressures and events of his life.

Writer Norman Cousins observed:  “What seems clear is that the greater the weight of his Presidency, the greater was the need for release.  Laughter to him was not merely a random physical response to humor but a physiological reality that was essential for restoration and rejuvenation.”

A terrific resource on maintaining a sense of humor is Rita Davenport’s inspiring book “Funny Side Up.”  In it she describes her multi-faceted career, as a teacher, social worker, television host, bestselling author, motivational speaker and corporate president.  I might add Rita has been incredibly successful at all of them.  She led the large network marketing company, Arbonne International, to $980 million in sales from 1991-2011.  Rita is a Hall of Fame speaker who delivers life-changing success principles with a sense of humor.  She understands that laughter increases retention by 80 percent. 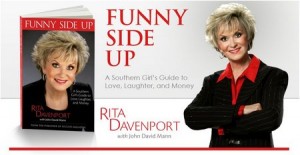 Her book draws on her life experiences, starting with her dirt-poor youth in Tennessee.  She credits her success to her ability to dream big dreams when faced with the life of struggle and poverty that her parents knew.  Her positive attitude has carried her through plenty of challenges.  My favorite chapter is titled “Laugh Your Way to Success (Or, How to Cope with Stress, Guilt, Change, Failure, and Life’s Other Little Blessings.)”

Among her pearls of wisdom, she advises bringing a sense of humor to the table, whatever table that might be.  She says, “Laughter is internal jogging.  It causes the muscles around the face to vibrate, which causes blood to rush to that area, which in turn improves brain function.  You think better and you feel better, and your health is improved. . . Besides, if you hold those chuckles back, the air tends to go back down and expand the hips!”

Rita’s book, like her speeches, is punctuated with humor.  Her theory is that it is important to develop a sense of humor because it is something that none of us are born with.  As proof, she offers this explanation:  “I have given birth twice and distinctly remember that neither baby was laughing when he came out.  Come to think of it, neither was their mama.”

What saved her, she says, is “the ever-ready capacity of laughter when your impulse is to cry or scream.”

“Failure is also one more opportunity to develop a strong sense of humour,” Rita writes.  “Have you ever had something happen that seemed just awful at the time, yet months or years later you found yourself laughing at it?” she asks.

“Here’s what you do.  First, get in the habit of saying, ‘Someday, we’re going to laugh about this.’  And after you’ve said that, then say, ‘Hey, why wait?’  The secret is to laugh sooner.”

What terrific advice!  Laugh sooner – and share the joy!

Mackay’s Moral:  A sense of humor is almost as important as our other five senses.