Four psychiatrists shared a hotel suite at a convention.  Talking one night, one of them said, “You know, people are always telling us their troubles, but we have no one to talk to about our problems.”
Another psychiatrist agreed.  “Let’s tell each other our biggest problems and see if that makes us feel better.  I’ll start.  I confess that sometimes I want to laugh at my patients for being so naive.”
The second one said, “My problem is that I’m usually drunk when I see my patients, and half the time I can’t follow what they’re saying, so I just nod and say, ‘Go on.’”
The third psychiatrist admitted, “I overcharge my patients so I can afford my big house, my fancy car and my vices.”
The last one said, “My biggest problem is that I can’t keep a secret.”

And who wouldn’t be tempted to share those juicy tidbits?  Well, if you want to be successful, the wisest action would be to forget you ever heard them, and never repeat one syllable of those confessions.  But we live in an imperfect world where gossip is often the only form of conversation that some people can seem to conduct.

Gossip has replaced news in many media.  It’s big business.  Outlets like TMZ and celebrity gossip programs get huge ratings.  Social media has made the truth a rare commodity, as people can share harmful gossip and rumors in an instant from anywhere in the world.  And the truth gets lost in the whirlwind.

The gossip business may be red hot, but office gossip is mostly bad for businesses.  The workplace should be a no-gossip zone.  But when it is not, consequences include lost productivity and wasted time, erosion of trust and morale, damaged reputations, dissension among employees and even the loss of good employees who leave companies due to unhealthy work environments. 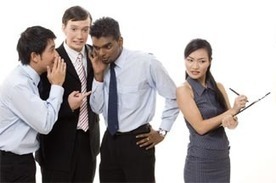 Gossip and rumors have been part of the workplace culture since ancient Egypt.  Although a certain amount of personal chitchat goes on in any workplace, gossiping employees can erode trust among co-workers and infect a team with hostility.

Before rumors gain a foothold in your organization, take some proactive steps.

Make sure your general company communications are efficient and as complete as possible.  Employees will believe rumors if they don’t have access to facts.  Even in tough times, give your people as much information as you can so they can rely on solid data, not half-truths.  If you can’t share news, explain why, so you don’t appear to be hiding anything.

Always confront rumors directly.  If you catch wind of an untrue rumor, address it promptly.  Go to the source and set him or her straight, explaining the damage that false information can cause.  Clear up any confusion with your entire workforce right away.  They may think twice about spreading or believing rumors if they know you’re ready to step in.

Set the right example.  Don’t listen to gossip that comes your way.  Either correct any misinformation immediately, or explain that you’re not interested in rumors.  Don’t pass along any unsubstantiated stories yourself.  Let the gossip stop with you.  If people persist in spreading rumors, suggest that they need more work to do.

Sometimes the harm that gossip inflicts is irrevocable.  It is critical to nip it in the bud.

Perhaps you are familiar with this Hasidic folktale:  A man went for months slandering the rabbi of his village.  When the High Holy Days approached, the man realized the enormous evil he had committed and, overcome with remorse, sought out the rabbi and begged for forgiveness.

The rabbi told the man he would forgive him on one condition:  that he go back to his house, cut up a feather pillow, scatter the feathers to the wind and then return.  The man raced home, followed the rabbi’s instructions and returned to the rabbi’s residence.

“Am I forgiven now?” he asked.

“One more thing,” the rabbi answered.  “Now I want you to go out and gather up all the feathers.”

“But that’s impossible,” the man said.  “They are scattered everywhere.”

“Precisely,” said the rabbi.  “And though you truly wish to correct the evil you have done, it’s just as impossible to repair the damage done by your words as it is to recover the feathers.”

Mackay’s Moral:  People who gossip are usually caught in their own mouth traps.