In 1860 a thirty-eight-year old man was working as a handyman for his father, a leather merchant.  He kept books, drove wagons and handled hides for about $66 a month.  Prior to this menial job the man had failed as a soldier, a farmer and a real estate agent.  Most of the people who knew him had written him off as a failure.  Only eight years later he was President of the United States.  The man was Ulysses S. Grant.

Most of us are afraid of failing.  Admit it.  We all face fears and anxieties every day, and the only way to overcome them and succeed is to recognize them up front so we can confront them directly.  Examine your fears during the light of day.  Somehow they always seem worse at night and more difficult to face.

Ask yourself what might happen during the day that you’re afraid of – failure to complete a big project at work, for example, or rejection by someone.  Then think of how you could prevent that failure.  Be on the lookout for behaviors and thoughts that add to your fear.  Train yourself to change your patterns of action and thinking.  Finally, pay attention to what you learn about failure as you confront it.  Use the experience of facing and overcoming your fear to confront and defeat the obstacles you face every day.  Start looking at failure as an opportunity to avoid a future mistake. 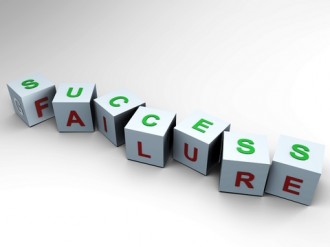 Failure can be one more step on your road to success.  You just have to turn it around in a positive direction.  It can strengthen your determination to overcome obstacles.  Failure can make you braver in the face of opposition.  It can help you learn what you need to do in order to succeed.  Failure can teach you to recognize your limitations and your strengths.  It can encourage you to change your strategy.

Though everyone faces setbacks in life, few of us should really call ourselves “losers.”  Part of success is dealing with, and ultimately overcoming, our failures.

Mackay’s Moral:  Some of the best lessons we ever learned, we learned from our mistakes and failures.