Welcome to this edition of i2P (Information to Pharmacists) E-Magazine dated Monday 18 April 2016.
In this edition we express concerns for the general state and quality of our political leadership, both in national terms and internal pharmacy.
We seem to be losing our sense of democracy with leaders appearing to be forever compromised and becoming paralysed in their decision-making.
Why is there no organised program to oppose the stacked review committee that is supposedly investigating pharmacy location rules and ownership rules?
It is obvious from the comments made by the industrial economist, Stephen King, that he is there to do a hatchet job on pharmacy, supported by the medical skeptic-dominated Consumer Health Forum.
Why is there a sense of complacency and why are those pharmacists that answer polls through the “yes” buttons as to whether they would sell out to global enterprises, simply lining up for the best offer?
Has everybody lost the will to fight for what they believe in?
The predictions made by Aldous Huxley are reverberating loud and clear.
Aldous Huxley  (26 July 1894 – 22 November 1963) was an English writer, novelist, philosopher and a graduate from Balliol College, Oxford, with a first in English literature.
He was best known for his futuristic novels including Brave New World,  a novel  that anticipates developments in reproductive technology, sleep-learning, psychological manipulation, and classical conditioning that combine profoundly to change society.
Huxley was widely acknowledged as one of the pre-eminent intellectuals of his time and was nominated for the Nobel Prize in Literature in seven different years.

i2P has become alarmed as to the predictions Huxley made in his book Brave New World have now materialised, particularly in the context of the global pharmaceutical industry. 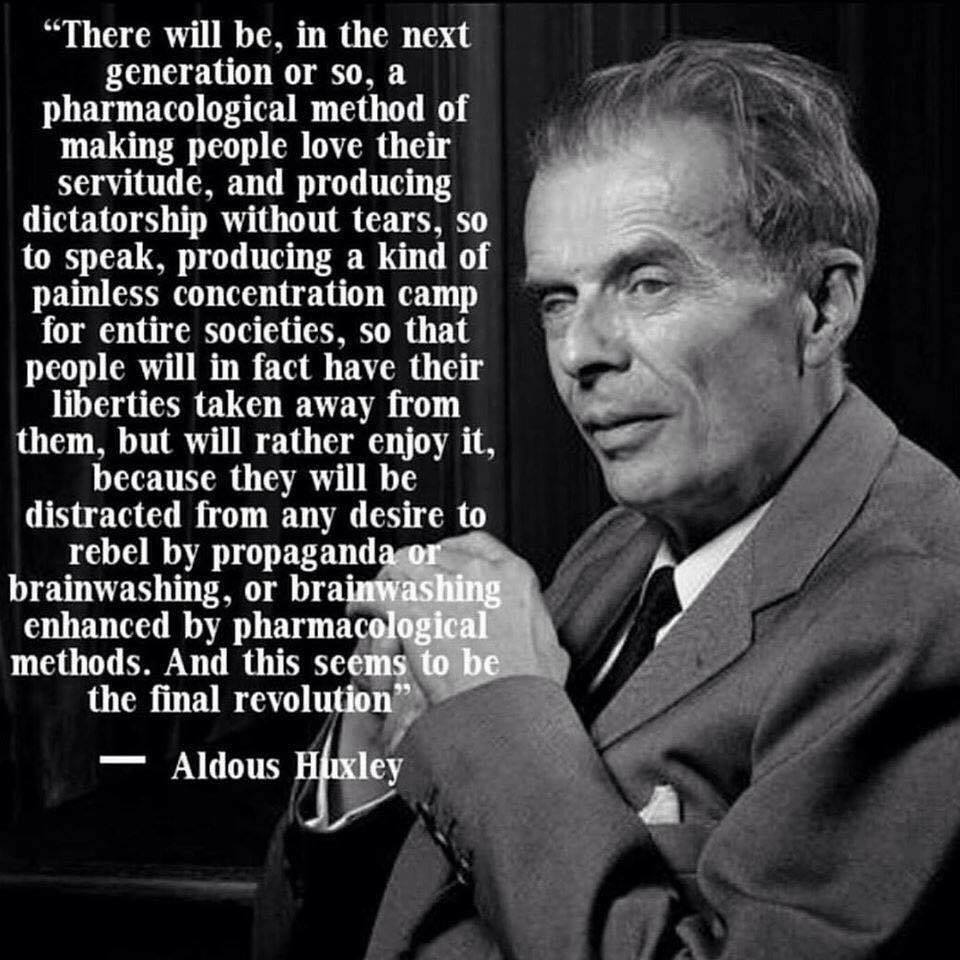 To test this new realisation, i2P surveyed the independent owners of ten NSW community pharmacies and asked a range of simple questions that related to the perilous future for Australian pharmacists.
Most indicated that they were so busy in keeping up with their daily grind that they simply did not have time to read or keep up with the volume of publications they were receiving. Also, that the pile of these publications was becoming so large that the only way to manage them was to “bin” the bottom half of the pile at regular intervals.

Then we asked the “clanger”.
“What do you think of Stephen King?”

Of the ten pharmacists surveyed, only two had heard of him and they had not actually formed a solid opinion as to the work he was doing.
Eight of the ten pharmacists did not recognise his name at all and did not have any idea of what work he was carrying out!
All expressed confidence that the PBS problems would sort themselves out and that the government would not allow pharmacies to be in supermarkets.

Talk about being “dumbed-down”!

None of the pharmacists were aware of the censorship that had been applied to a film about vaccination safety and fraud, that had been banned from Robert de Niro’s Tribeca film festival, or that this particular instance of censorship was now unravelling and was gaining momentum and support that will hopefully expose the extent of corruption and criminality surrounding pharma executives and their paid politicians, which was fast becoming the novel sequel to Brave New World.

We are not talking about events in the US – it is happening in Australia, the UK, and in Europe.

A recent movie about the vaccine industry that was due to be released in the US through a series of film festivals was censored through the application of political pressure threatening to remove current and future grants if it was screened.
i2P covered some of this in its last edition in the story Vaxxed-From Cover up to Catastrophe  where celebrity actor Robert De Niro was forced to cancel the movie from his own Tribeca Film Festival.
This was quickly followed by two other locations that had promised to screen the film.
They too, crashed under the pressure.
This type of censorship, supported by mainstream media is illustrating that our democratic rights are under threat.
In Australia, we  are seeing the same thing occurring in the “no jab-no pay” legislation which takes away the rights of parents to protect their children from unsafe vaccination practices.

It is no accident that we are focusing this week on political pharmacy from a global aspect because it is becoming a major concern.
Read The Corporate Capture of Democracy (and Community Pharmacy) to get some insights as to what is happening in your own backyard, and organise to protect yourself and your profession.
Peter Sayers is back to illustrate what is happening with natural medicines and is happy to report that at least one country has the political will to listen to its constituents.
Read Switzerland Gets it Right for this more positive development.

Gerald Quigley is also back with some reportage on the evidence base for low dose aspirin.
You would think that after all this time the data on aspirin would be quite conclusive.
Has this been another Big Pharma con?
Read: Low dose aspirin – pro or con? to make up your own mind.

And we introduce a new writer this week (Rebecca James), who has been stimulated to write about the quality and direction of pharmacy leadership. It seems there are others slowly waking up to the real concerns of our profession.
Read: The State We Are In but please do something about it before it is too late.

We also introduce a guest writer (Professor Rob Moodie) who is warning us about how we have lost the fight for good health in Australia, with one of the reasons being the lack of funding for promotion and research.
To i2P this just seems another instance of the play book of Big Pharma in action and it is hard to understand why government would bow down to health procedures that are simply bad health.
The proposed sugar tax is a good proposal in the sense that it would reduce sugar consumption and have an impact on obesity and other lifestyle illnesses.
The revenue raised may even fund promotion and research.
Is there a political will?
Read: How Australia is losing the health fight

Harvey Mackay is also back with us and he is talking about the poor quality of political persuasion and how to correct it.
It has adaptation for pharmacy, particularly for any leadership aspirant.
Read: Make points with persuasion

Enjoy your read for this edition and please consider the perilous state that our profession is heading towards.
We all need to come together for the benefit of our profession – we live it, own it and are the experts in it.
Not governments, not corporates and certainly not the industrial economists or pretending consumer representatives that seek to control us.