Blackmores have designed and opened an innovative flagship store that offers the complete wellbeing experience, with rooms for private consultations with qualified naturopaths, a modern ‘Mindful Ocean’ system to assess mindfulness, the Wellbeing Bar for food and drink tasting as well as offering the comprehensive Blackmores’ product range.
Located on Level 5 of Westfield, Bondi Junction, the appearance of the store is the result of some thoughtful design work with the result being an elegant, interactive client experience supporting the concept of a health destination store.
There is much thought gone into the store presentation – a design and layout that pharmacy could learn from, particularly the way naturopaths provide their clinical services integrated with the efficient layout.

CEO, Ms Holgate, said the new store is not about building a retail presence across Australia but is intended to help connect with Blackmores’ customers.
“We are not going to become retailers, we partner with pharmacy.
Around 80 per cent of our products are sold through pharmacy in Australia and they give fantastic advice,” she said.
“What this allows to do is to bring our products and our therapies much closer to the consumer and enables us to listen to the consumer and better understand their health needs.” 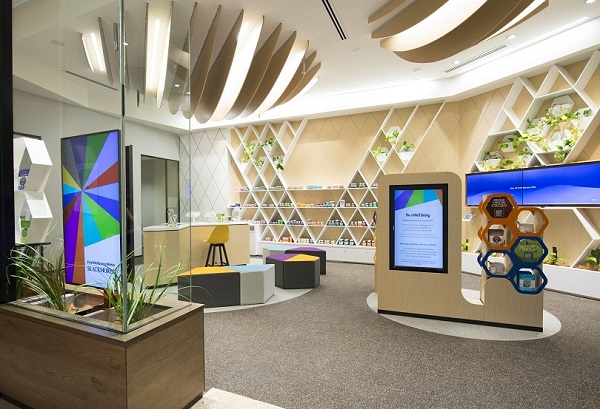 “As the most trusted name in vitamin and supplements, Blackmores aim to provide evidence-based information about natural health care to our consumers.”
“Our new flagship store provides a personalised experience for our customers to take control of and further invest in their health.
We know there is a lot of confusing information out there which is why we want to personally help Australians on their journey to wellbeing through advice and education.”

“Featuring human, digital and tactile experiences the new flagship store is a unique prototype that takes retail into a new health space, offering the next-gen of interactive retailing whereby consumers are treated to an integrated offering of service and product.”

One of the hero features of the flagship store is the ‘Mindful Ocean’, designed in consultation with scientists at Swinburne University of Technology.
Using sensors that detect brain activity, the ‘Mindful Ocean’ provides a four-minute personalised session showcasing how the mind interacts between levels of relaxation and calm verses active thinking.

“The ‘Mindful Ocean’ gives consumers the opportunity to assess their ability to find mindfulness, and as a result, begin to take control of their cognitive wellbeing,” Mr Fenlon said.

The Blackmores Flagship Store will also feature zones for personalised conversations and advice, including an interactive B Bottle activation with weekly wellbeing questions for customers to physically answer.
Additionally, there is a Wellbeing Bar for customers to sample food products, starting with the newly launched Blackmores’ Superfoods range.

The store will be staffed by qualified naturopaths and will provide an opportunity for customers to seek evidence based information, and book a 20 or 45 minute private consultation. The store layout is changeable and can also be used for health seminars, workshops and small yoga classes.
This feature is something that pharmacy is yet to include within its own environment, and certainly will feature in a new paradigm pharmacy, slowly evolving (about 35 years too late according to i2P research).

In the past six months Blackmores has increased it production capacity by 60 per cent.
The company has hired 100 extra people but has now run out of office space.

In November, which Mr Blackmore believes was “probably a record month”, Blackmores produced 2.7 million bottles of product.
It will have capacity to produce 4.2 million bottles a month in April next year.

In some product lines there is a natural brake on boosting production immediately.
For example, evening primrose oil, a market dominated by Blackmores, comes from a plant harvested once a year.
In other cases Blackmores is constrained by its strict quality criteria.

Ms Holgate is loath to put the brand name at risk by compromising even slightly on quality.

“I’m sure I could give you a lot more sales, but not at the quality levels we want,” she said.

Last month Blackmores inked a joint-venture deal with dairy group Bega Cheese to supply infant formula and other nutritional products to Asia, opening a range of new opportunities for both companies.
Ms Holgate said the company actually uses a dairy rival, New Zealand’s Fonterra, as a case study for an internal quality workshop.
Fonterra has been embroiled in a number of dairy food scandals including the 2009 melamine crisis in China and the false botulism alert, which prompted a massive product recall, in 2013.

Companies like Blackmores, Telstra and Microsoft are tapping into what Apple has known all along is the key to earning consumer dollars.
i2P has often published articles on the Apple genius bar emulating the old style pharmacy glass counter used for “counter prescribing, and updated by Lloydspharmacy in the UK with its “health bar” pharmacist and clinical station in the front of each pharmacy, fully separated from the dispensary

All three companies have just launched flagship stores, and with finely tuned gimmicks like free smoothies, health assessments and in-store baristas, they are turning to “outreach” in formation services in a serious way.

If industry experts are to be believed, we can expect even more outlandish offerings as retailers try to outdo each other in the retail destination stakes.
The Pharmaceutical Society of Australia (PSA) is launching an extension of its “health destination pharmacy” in early February, but I don’t think that it will run to coffee or smoothies just yet.
However, I would recommend that they visit the Blackmores’ store and the Telstra store for ideas on expanding the future vision for a health destination pharmacy.
They are heading in the right direction, but do need a little extra help to get there.

Blackmores Managing Director David Fenlon said the store was a prototype that aimed to provide “a personalised experience” for customers to take control of their health.
Doesn’t this sound like “Pharmacy Self Care” – a concept that has been trickling along for as long as I can remember!
The Australian Self-Medication Industry (ASMI) association is trying to reboot the concept, but it needs pharmacy support. There are some dangers in self care and they are discussed in the bottom third of an article within this edition. Go to: Seth Godin Clarity – as applied to pharmacy
But do set up your own unique version, because as Blackmores claim to customer connection appears valid, it has already demonstrated that it can beat pharmacy self care in a blink.

The Blackmores launch came on the back of Telstra’s $112 million flagship store opening in Sydney’s CBD in October 2015, billed as a “discovery hub” as opposed to a humble shop.

Also described as a prototype — to be rolled out across the country next year — it aims to take a bite of Apple’s retail mastery.

It’s here that you’ll find an in-store barista to caffeinate your shopping mission, and a chance to test-drive drones, smartphone and tablets.
i2P has written material for all of the above concepts to be incorporated into pharmacies (even coffee shop-type waiting area designs), but pharmacy leaders have been very slow to react.
By the time they do, all this will be “old technology”unless community pharmacy owners begin their own renewal processes to start the charge into innovative ideas – a “bottom-up approach”, rather than a “top-down” and very slow approach.

Hundreds of thousands of customers are expected to walk through the doors of the Telstra flagship store, to check out gimmicks like its “touch-and-take” technology.

i2P has previously written about a flagship pharmacy, but we called it a training pharmacy.
Now wouldn’t that be a great investment for the pharmaceutical industry to support!
PSA could have its own pharmacy to document and apply research in a very streamlined fashion.

The Telstra hub has on display high resolution, multi-touch display tables allow customers to compare all the information about each product, simply by placing them onto the table, with the data then printed for future reference.
i2P has also written about “touch tables” for incorporation in a clinical space to enable interaction between a clinical pharmacist and a patient.

Microsoft followed with a 557 square-metre flagship store of its own, launched in Sydney last month on the back of its New York City prototype.

With free Wi-Fi, a community theatre and meeting spaces, and plans to host hackathons and coding workshops, it’s no surprise that the company has poached former Apple’s senior store manager Nick Wells to run the new outlet.

There’s even a tech bar where you can bring  your Apple MacBook to fix Windows installations like Word, free of charge.

And Microsoft’s full range of products can be purchased, debugged or repaired in store, including removing that pesky bloatware that Windows runs on its notepads.

It’s no wonder the writers of i2P exhibit frustration because of the lack of imagination by pharmacy leaders and pharmacy proprietors.
We claim to “live in the future” at i2P and Blackmores, Telstra and Microsoft has just validated much of our thinking of the past 12-15 years.
But there is now enough information out there to design your own new paradigm community pharmacy.
Just do it!