Medical apps have exploded into health-related industries in very recent times.
So much so, that they have proliferated to the extent they confuse the markets they seek to be part of.
Medical apps have also been developed by a range of people, including doctors and pharmacists (one app is publicised in this edition – “Our Pills Talk” developed by pharmacist Steve Cohen).

The technology is disruptive in the sense that many pathology tests will be displaced by this cheap technology and if the gatekeeper to the results is the patient, then they will share with whoever they please (including pharmacists).
This will help to break down the silo mentality that exists between GP’s and pharmacists in the sharing of information.
Because the apps involve mobile phones, the problem of portability is immediately resolved; if the patient is the gatekeeper the problem of privacy is resolved and the problem of security is delegated to the app developer and plan provider for the mobile phone.

We are talking about big business already involving themselves in disruptive medical models, so the normal defences deployed by medical practitioners will not hold up (refusal to deal with results not provided by their normal pathology provider, the sowing of doubt by highlighting negatives that will never happen etc).
So we are talking about apps and systems that put real power and independence within a patient.
Self care will become a more proactive option for a patient – this is pharmacist mentoring territory.
Clinical pharmacist consultations will become more commonplace as pharmacists become involved at the coalface.
Being the most accessible health professional, advantage can be taken of the mentoring role that would accompany the delivery of patient biometrics.
Many GP’s have already abdicated this role because of excessive workloads.
Initial patient evaluations performed by pharmacists would be a more economical approach and would get more patients referred to their GP’s in a speedier manner.
As pharmacist expertise builds up within patient biometrics, appropriate referrals can be generated to GP’s who can practice at the level of treating complex patients, leaving the simpler conditions to pharmacists.
It is acknowledged that doctors will always be pivotal when involved with primary health care, but it should only be at the top (complex) end. This would encourage collaboration provided there is a respectful acknowledgement that pharmacists do play an effective role already in health care delivery.
Pharmacists have a lot of holes to plug in their service delivery (e.g. privacy), but so do doctors.
Both have need to revitalise and renew their offerings and processes to come into the 21st century.
Traditionally, this type of evolution has been slow in onset and today is no different.
But the world will belong to those health professions that can operate seamlessly and provide maximum “customer satisfaction levels” for each shared patient.

Also, there will be no room for the current crop of skeptic naysayers and critics unless they too perform at an evidence based level, have appropriate qualifications, and in fact, have actual patient clinical experience.
At that point they may have credibility, but they will have to lift their game, based on past performances.

The prime focus of this article is to draw attention to an app development team that entered a competition sponsored by a well cashed-up sponsor.
The team developed an app and a small lens add-on that allows blood-cell analysis via a smartphone.
The app, called Athelas, won a prize at a coding event held by the prestigious start-up hub Y Combinator.

The team says it can detect diseases such as malaria and cancers in seconds, through so-called predictive cell counting.
But experts warned of the difficulty of reproducing the quality of medical labs results using just a smartphone.
Users take a picture of their blood using the lens attachment, which is then sent to the app’s servers, and the results are then sent back to them.

Team leader Tanay Tandon said in his submission:
“For more than two centuries, cell morphology – or the practice of viewing/analysing a person’s blood in order to diagnose conditions – has been the primary way to approach medicine. Yet, despite the critical nature of blood analysis to the medical industry – the process has hardly changed from its long, expensive form for 150 years.”

“We’ve built a low-cost lens attachment to the smartphone camera that images blood at high magnification. The attachment magnifies/focuses on the sample by means of a 1mm ball lens. Most importantly, we’ve implemented computer vision to algorithmically count and identify cells in the bloodstream to automatically diagnose disease/conditions.
In short – a malaria test that requires no expertise, takes a few seconds, and costs next to nothing. All on a smartphone – holding potential to save thousands of lives.
Furthermore, through predictive cell counting, Athelas can mimic the process conducted in lab-grade environments in rural areas.” 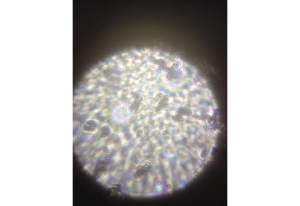 Mr Tandon added that:
“In rural areas, the tech will really shine, providing previously unavailable diagnostic skills through the power of artificial intelligence and computer vision”.

But experts in the field are not so convinced by the reality of using a smartphone to detect and diagnose.

“The major limitation for this approach is that most viruses require electron microscopic exams to see them.”
N.B. Two images show results obtained using the app

Using the example of the current outbreak of Ebola – which has killed more than 800 people in western Africa and is spreading partly through air travel – Dr Safdar said that patients in the early stages of illness might not have large enough quantities of the Ebola virus in their peripheral blood to be diagnosed. 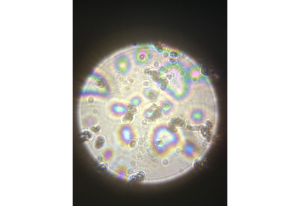 The threat of false positives, or incorrect results, was another concern.

“I’ve no problem with it in principle – but in reality, these need to be carefully calibrated around the right type of diseases,” said Dr Mike Chapman, of the University of Cambridge’s Department of Haematology, adding that some diseases were easier to detect than others.

Dr Chapman added that he was aware of instances where people took a smartphone picture of a microscopic image of their blood and sent it to an expert.

The Athelas app won a prize as Y Combinator held its first “hackathon” last weekend, where teams come together and are invited to create software together in a limited amount of time.

Mr Tandon won an interview with YC to be in its next batch of start-ups. The California-based accelerator counts billion-dollar start-ups such as Airbnb, Reddit, and Dropbox among its alumni.

Already some GP’s are actively prescribing apps for their patients. Commonly they are apps that they generally have had development  experience with.
Pharmacists too are developing apps, but not too many that cross over to become a shared experience with a GP.
When this begins to happen we will have a respectable condition diagnosed as collaboration.
As marketing guru, Seth Godin says:

Turning passion on its head
Instead of, “do what you love,” perhaps the more effective mantra for the entrepreneur, the linchpin and maker of change might be, “love what you do.”
If we can fall in love with serving people, creating value, solving problems, building valuable connections and doing work that matters, it makes it far more likely we’re going to do important work.