In a win for commonsense, a professional collaboration between community pharmacists and local GP’s coupled with a simultaneous a solution for a major public health problem, a mutually respectful system has been piloted in the County of Staffordshire in the UK.
And patients involved in the pilot study have documented high levels of satisfaction, simply because they have been provided with an understandable system to treat a common condition, with clear boundaries and health professionals supporting each other and their patients.
And that is unusual in these days of discord and open “turf war” issues.
So what happened in Staffordshire that produced such positive results?

It seems that a local initiative involving a rural pharmacy, an equipment device manufacturer and a range of interested GP’s collaboratively created a pilot study surrounding Respiratory Tract Infection (RTI) and the identification of patients who were infected with virus or bacteria.

Central to the study was the provision to the community pharmacy of a CRP analyser point-of-care (POC) unit.
CRP stands for C-Reactive Protein which is a blood marker for whole body inflammation levels.
The brand of POC analyser used was Finecare and pharmacist training in the use of the analyser was provided by the manufacturer’s staff.

RTI’s are common and account for approximately 60 percent of antibiotics used in primary health care, despite the fact that most of these infections are viral in origin and are self-limiting.
CRP levels are commonly in the high range for bacterial infections with viral infections recording much lower levels, so knowing what a patient’s CRP level is can suggest a GP referral system for those patients who may need antibiotics prescribed.

In the UK, the National Institute for Health and Care Excellence (NICE) recommends that point-of-care (POC) C-reactive protein (CRP) testing should be considered in adult patients presenting with symptoms of lower RTI in primary care where clinical assessment is inconclusive and it is unclear whether antibiotics should be prescribed.
Additional recommendations regarding antibiotic use in these conditions have been issued by Public Health England and updated European guidelines are also relevant in this context.
A Cochrane systematic review concluded that POC CRP testing reduced antibiotic use in patients with acute respiratory infections, with no difference in the overall clinical recovery of patients.
Studies of POC CRP testing in RTIs have also highlighted potential cost savings.

So the basic structure of the Staffordshire pilot study included the following elements:

* The device selected for the study was the Suresign Finecare II POC analyser and CRP test (CIGA Healthcare; UK).
This test is based on a fluorescent immunoassay principle and consists of: a liquid for sample dilution and lysis of cells; and a test cassette with CRP-specific monoclonal antibodies coated to a membrane.
One single drop of blood (8.5µl) from a finger prick is required to perform the test and results are available within three minutes.

* Pharmacy clinical assistants trained to interview patients and screen them for referral to a pharmacist.

* A private consultation area dedicated to pharmacist-patient interviews within the pharmacy and suitable for POC testing.

* A pathway system based on POC CRP test results:

* Appropriately trained staff in GP surgeries to refer patients to the pharmacy for CRP testing and to fast-track return appointments for patients with pharmacist written referral forms.

* Special advertising posters for display in GP surgeries and the community pharmacy. 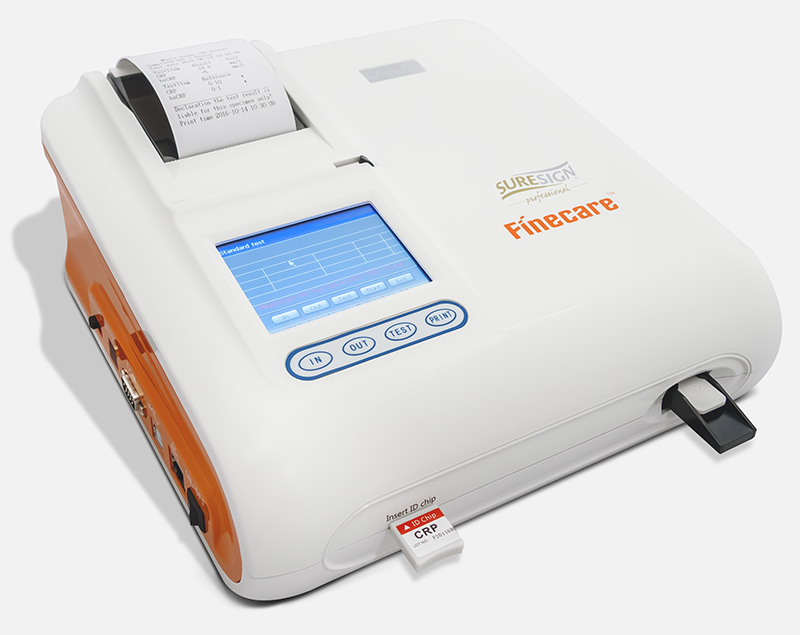 * Patient access and eligibility
There were three ways that patients could access the pilot: presentation at a GP practice, referral by the pharmacy and self-referral.
In all cases, the decision to carry out a POC CRP test remained with the pharmacist.
The first consultation of a current episode of acute cough of duration <4 weeks that was considered to be caused by a lower RTI provided eligibility into the scheme.
At the time of the consultation, at least one of the following four symptoms was necessary: shortness of breath, wheezing, chest pain or auscultation abnormalities.
Also, at least one of the following five symptoms was necessary: fever according patient history or measurement >38ºC, perspiring, headache, myalgia or feeling generally unwell.

Patients were excluded if they met any of the following criteria: patients who have been experiencing symptoms for less than three days (72 hours), patients who have been experiencing symptoms for three weeks or more, or patients suffering from chronic inflammatory conditions (e.g. rheumatoid arthritis).
Children and pregnant or breastfeeding women were also excluded because of NICE guidance, as there is some evidence that CRP levels are elevated during pregnancy and while breastfeeding, and the use of a lancet deemed it suitable to exclude children as this could have caused pain.

Patients presenting with severe symptoms or any symptoms of concern were referred immediately to the appropriate healthcare professional.

A total of 52 patients were entered into the study.
Overall, 25 patients were referred via GP surgeries, 6 by pharmacy staff and 21 self-referred as a result of a consumer awareness campaign.
Patients were asked questions by the community pharmacist to establish if a POC CRP test was required or whether referral to another healthcare professional was suitable.
In total, 44 patients were determined to be suitable for POC CRP testing.

All patients were followed up at three and seven days by the community pharmacist by telephone to assess their course of action following the pharmacist intervention and their satisfaction with the process.

Following the POC CRP test, 6 patients were referred to the GP surgery, 5 were allocated to the ‘watch and wait’ category and 33 were recommended self care.

Of the ‘watch and wait’ and self-care patients (n=38), none of them required subsequent GP referral.
Overall, 95% of patients who received the POC CRP test reported that they would have otherwise visited the GP and would have expected antibiotic treatment.

This collaboration resulted in a reduction of unnecessary visits to the GP, a reduction in antibiotic prescribing, an opportunity for the pharmacist to promote health literacy consultations and patient direction into self care.

A respectful and beneficial relationship between community pharmacies and GP surgeries was also created and patient satisfaction levels scored in the high range.

With the Pharmaceutical Society of Australia (PSA) currently seeking access to the MBS, and government always seeking economies for the health system a collaborative model like the Staffordshire pilot may be of sufficient interest to government to create this access.
It does sensibly build on existing and proven resources rather than try to create something entirely new.
As a method of patient engagement it has proven popular in the initial pilot study because the patient is central to the system and is able to build their health literacy levels within such a system.
High levels of health literacy equate to lower overall health costs – and it does positively impact in the area of self care – a market that is under-developed and yet to reach a full potential for community pharmacy.