An opportunity for illict cannabis growers to enter the legal medical cannabis industry is being offered by a government amnesty and agreements to protect the value for growers.
Ruatoria based Hikurangi Cannabis Company has started a roadshow of hui with cannabis growers in the Tairawhiti region to develop agreements that will pay royalties to breeders who contribute strains that realise commercial value.

“An amnesty included in the new medicinal cannabis legislation is big news and very exciting for the industry but it will mean foreign companies and research organisations will be trying to lock up rights to commercialise New Zealand cannabis genetics” said Hikurangi operations manager Panapa Ehau.

“We have developed legal arrangements for New Zealand cannabis breeders to ensure their rights and interests are protected” said Mr Ehau.

“As the people’s cannabis company we want to make sure breeders who contribute genetics into the legal industry get ongoing benefit from the knowledge, skills and expertise they have applied to plant breeding.”

Hikurangi research staff include plant scientists and a number of longtime cannabis breeders that have developed a breeding programme.

Mr Ehau is encouraging growers to get in touch and Hikurangi can visit them to discuss the opportunity for collaboration.

The Medicinal Cannabis bill has its second reading this afternoon with the final reading expected during the week of 10 December.

2. Civilized: Researchers Finally Discover the Genes that Produce THC and CBD in Cannabis

While the genome of the cannabis plant was sequenced back in 2011, researchers have struggled to isolate the genes responsible for producing the plant’s two most prominent chemicals.
Until now.
A joint Canadian-US effort has identified the genes that produce THC (the chemical in marijuana that gets people high) and CBD (the compound most well known for its medicinal applications).

The main obstacle in the way of finding these genes earlier was the abundance of what researchers call ‘junk DNA.’
This is genetic information that has been dumped into the genome of marijuana by viruses over years of evolution.
In fact, somewhere between 70 and 75 percent of the DNA of marijuana and hemp plants is derived from these viral sources.

“You can only manipulate a gene when you know where it is located,” said Harm van Bakel – one of the study’s contributors, who is also a genomic expert at the Icahn School of Medicine at Mount Sinai in New York.
“And you also need to know something about the rest of the sequencing in the genome so that you can uniquely target the gene of interest and not be sidetracked by…other things that look similar,” Bakel told told The Toronto Star.

But, not only did this mass of viral DNA keep the THC and CBD genes out of sight from researchers, it also likely contributed to their development.
Exposing cellular mechanisms to viral DNA can cause mistakes that lead to genetic changes in plants like cannabis.
These ‘mistakes’ are “almost certainly” what has promoted the development of marijuana’s THC and CBD genes, according to Tim Hughes—a molecular geneticist at the University of Toronto’s Donnelly Centre for Cellular and Biomolecular Research.

The discovery of the genes will make it much easier to grow weed with specific levels of the two primary compounds of cannabis.
It also enables researchers to move on to figuring out which genes are responsible for giving different strains their signature taste and smell.

A Marin County medical cannabis and pharmaceutical coalition says it has found a way to ramp up production of one of the rarest compounds produced by marijuana flowers that early studies have shown could be a way to treat diabetes, lower cholesterol and provide other health benefits.
This cannabinoid known as THCV, or tetrahydrocannabivarin, is considered one of the rarest cannabinoids and is only found in trace amounts in most strains of the plant.

Dr. Michael Moskowitz, of San Rafael, president of the Bay Area Pain Medical Associates and a local psychiatrist, is the founder of the Medical Cannabis Research Consortium of Marin, which has been studying THCV.
He began recommending medical cannabis to patients in 2015 and found it had several subjective benefits, including individuals reducing psychiatric and opioid pain medication use.

He said he now plans to study THCV’s effects on one patient who has been severely affected by both youth and adult type II diabetes.

“The only thing that THCV does is it’s analgesic and anti-inflammatory, it’s neuroprotective, which means it protects the nervous system,” Moskowitz said.
“It’s anti-nausea and vomiting. It helps with bone health and bone formation, it’s sleep-promoting, it’s anti-epileptic, it’s anti-anxiety. It’s a major anti-psychotic. And it helps with appetite suppression, it’s anti-diabetic and it’s anti-cholesterol.

“Other than that it didn’t do that much,” Moskowitz joked.

Moskowitz said that despite its rarity, THCV is not known to be a risky drug, has no lethal dose and has trivial side effects.

“The cure for the side effects is a nap,” he said. 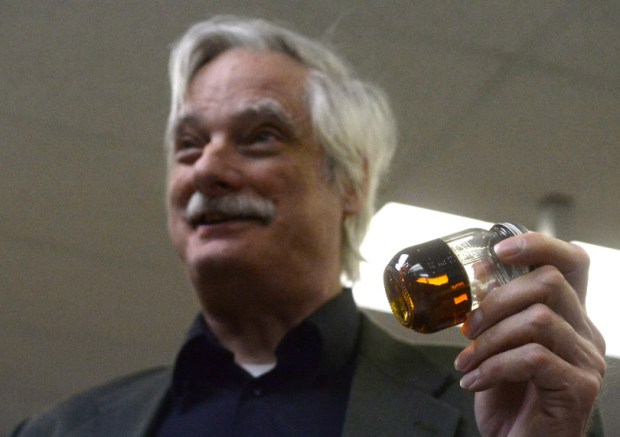 Bill Heriot, founder of Liposome Formulations Inc., holds a jar of distilled THCV at his facilities in Novato, Calif.

The Bel Marin Keys-based bio-pharmaceutical company Liposome Formulations Inc., which is also a member of the local consortium, announced this week that it will be releasing several new medical cannabis products, one of which is a THCV pill.

Bill Heriot, the company’s production manager, said the liposome patents they hold allow for faster absorption of medications and dietary supplements also work for medical cannabis as well.
The company is also undergoing clinical trials with the Food and Drug Administration for a drug that treats osteoarthritis.

The company is hosting an open house on Friday at 42 Digital Drive, Suite 6, in Novato for the Novato City Council, city staff and the public as the city begins work to develop cannabis industry regulations.

Heriot said the goal of the consortium is to create a vertically-integrated medical cannabis company — meaning controls from production through sale — that will be able to deliver medical grade cannabis products to patients.

“We plan to compete directly with GW Pharmaceuticals because we have the patents, the technology and the know-how to do just that, which is unheard of,” Heriot said. “We’re a small, privately-owned company and can move forward very rapidly and pivot on a dime to enter this marketplace, which is what our goal is in doing. It’s exciting times ahead.”

Researchers like Heriot, Moskowitz and others in the consortium are hopeful that THCV can go the way of another cannabinoid known commonly as CBD, cannabidiol, in the medical world.

In June, the U.S. Food and Drug Administration’s approved a cannabis-based epilepsy drug Epidiolex, which medical cannabis supporters are hoping is signaling a potential shift in tolerance for cannabis’ pharmaceutical uses.

GW Pharmaceuticals, the company that made Epidiolex, has also been researching THCV as potential treatment for a variety of diseases and health issues such type II diabetes, schizophrenia, epilepsy, cognitive disorders such as Alzheimer’s, along with several others.

There has been some peer-reviewed research conducted on the effects of THCV, mostly outside of the U.S., which found it to be promising for diabetes treatment.

A 2013 study in Nature’s Nutrition & Diabetes journal tested THCV on mice and concluded that it could be a potential treatment for type II diabetes. The study was partly funded by GW Pharmaceuticals and some of the study coauthors were either employees or stockholders in the company.

More recently, a 2016 Diabetes Care journal also concluded THCV could represent a new therapeutic agent blood sugar control for patients with type II diabetes. A 2012 study in the American Journal of Pathology stated that THCV seems to be a “promising therapeutic compound” for treating diabetes by decreasing inflammation and oxidative stress, which the study states “are key processes in the development of diabetes and diabetic complications.”

As to whether THCV is also psychoactive like THC, Moskowitz said it has been categorized as both, but said the research to support either conclusion is lacking.

He found the strain that later came to be known as “Black Beauty” several years ago when he and a research partner, Ed Rosenthal, were mutating the genotypes of the plant. They were trying to bolster the plant’s fragrance-producing terpenes so that it could be more marketable, but what they got was something far different.

Bianchini said he nearly tossed the strain after lab test results showed it had low THC and no CBD. Before doing so, he said he got a call from Steep Hill Labs in Oakland informing him that the strain was producing an unusually high percentage of THCV — about 3.5 percent.

“I said, ‘You know I wanted to ask you about that. What is it?’” Bianchini said. “I have been in this industry for a while and had never heard of it.”

These higher THCV levels are believed to have originated in strains from sub-Saharan Africa, according Bianchini and Moskowitz. But as cannabis became more lucrative in the 20th century, especially those with higher THC levels, Bianchini said growers were breeding their plants to produce more THC at the cost of other cannabinoids.

“What we’ve been doing is reversing that through breeding and that’s the first one that we’ve come up with,” Bianchini said. “Now we’ve gone from one and we’ve developed four distinct phenotypes.”

But even with the higher THC levels, the cost to produce enough cannabis to make THCV production marketable is still quite high, especially considering California’s regulations.

Bianchini said he’s now focusing his attention on hemp, and said they have nearly bred this high THCV-producing genetic information into a legal industrial hemp plant. This could significantly reduce the cost of production for THCV as Congress considers the 2018 Farm Bill, which would effectively legalize hemp, though there is still question about whether it would still be categorized as hemp.

The Marin-based medical cannabis consortium said the ultimate goal is to get a federally-approved pharmaceutical drug containing THCV. By having a licensed pharmaceutical company through Liposome Formulations on its side, Bianchini said they’ve got a leg up.

“No matter who is making a medical product, it’s going to have to be through a FDA-licensed pharmaceutical company,” Bianchini said.