Editor’s Note: That something is very wrong and corrupt involving regulatory agencies and government policies surrounding vaccines, both in the US and Australia, that ought to be of major concern to all health professionals who espouse to practice under evidence-based rules.
Corruption is embedded in the highest levels of regulatory agencies and those health professionals trying to practice “safe vaccination” (being neither anti or pro vax extremists) now find their practitioner registration being threatened by AHPRA if they make “anti-vaccine statements” to their patients, as part of their duty of care to those patients.
This is an intolerable threat to the clinical independence of those health practitioners who indeed are aware of the shortcomings of vaccine policy and the twisted statements that support vaccination, which is damaging for patients, particularly the very young.
They are aware of the lack of evidence or the corrupt nature of existing published evidence and are also aware of the patient need of informed consent.
Judy Wilyman continues her fight to ensure safe vaccination policies will prevail, and how unsafe existing policy has become.
She takes up the debate with elements of academia and has provided a copy of a letter signed by twelve CDC scientists exposing how corrupt their agency has become.
Pharmacists should take note and become pro-active on behalf of their own patients to ensure safe vaccination and this is a primary responsibility for our leadership organisations that also need to be lobbying for safe policies and practices, given that so much effort has been made to create vaccination clinics run by pharmacists.
Pharmacy leaders, take your collective heads out of the sand and do something to restore sanity.

To the UOW executive dean of the Faculty of Science, Medicine and Health
Professor Alison Jones
2 November 2016

Further to my letter dated 28 October 2016 demonstrating that you are supporting anti-scientific messages with your claim that the link between vaccines and autism is discredited, I am providing you with this letter from 12 CDC scientists to the Chief of Staff at the US Centers for Disease Control and Prevention (CDC). This letter exposes the lack of integrity and ethics that is occurring in government research and how corporate and political interests are influencing decisions. This represents a danger to public health when this research is used to educate doctors and health professionals to become certified practitioners.

The regulatory boards for health professionals in Australia are stating that practitioners will be de-registered for presenting  ‘anti-vaccine statements’. This is done by claiming that these statements are “anti-science”, yet this definition of anti-science is based on pharmaceutically funded research. Further, this research is then used to educate doctors with a curriculum that is influenced by pharmaceutical and biotechnology companies through funding arrangements. This is explained in chapter 6 of my PhD thesis published on the University of Wollongong website   http://ro.uow.edu.au/theses/4541/

As professionals you are both aware that the only way that the link between vaccines and autism can be discredited is if the childhood vaccination schedule of 16 vaccines is trialled in a large study of vaccinated and unvaccinated infants for 5 or more years, with the health outcomes of all the children studied for this length of time. But as you know this study has never been done (Peter McIntyre (NCIRS), Paul Offit (Children’s Hospital Philadelphia)). This makes the current schedule of vaccines an experiment on the population, without adequate monitoring of the health outcomes for all children. Promoting the claim that “the link between vaccines and autism has been discredited” is promoting anti-science material and dangerous to population health.

The public depends upon UOW academics to be promoting evidence-based science on its website and there are serious consequences to community health if you are not. Therefore, I hope that you will follow the lead of the CDC scientists in the attached letter to show integrity and ethics in the research at UOW.

I have copied this letter to the concerned Australian community, government ministers, and to the media for open discussion and debate of the evidence for government vaccination policies.

Editor’s Footnote: The link below will take you to a letter signed by twelve CDC scientists exposing corruption and mismanagement of this government agency.
Read it with concern and be part of a process to unravel faulty government policy that results from corrupt inputs

Judy has also asked for the following item to be circulated:

Please help to expose the lobby groups who are promoting vaccines on false and misleading information through health ministers that do not have qualifications in health. Signing this petition could help to do this. Please see below.

From: Meryl Dorey [mailto:avnivm@gmail.com]
Sent: Friday, November 4, 2016 10:22 AM
To: AVN Group
Subject: I am asking for your help urgently! Please sign and share now!
Importance: High

We have a unique and time-sensitive opportunity to hopefully help expose the corruption implicit in the passage of No Jab No Play legislation in Victoria. But your help is needed and needed now! If you have not yet signed this petition, now is the time to do so! Please read the following from a concerned group of Australian parents and share this information widely

*Our political insiders have advised that Jill Hennessy’s position in parliament is believed to be under threat and her publicity hoax surrounding the abusive tweets saga was allegedly an attempt to gain public sympathy to try to salvage her position.

The media and Members of Parliament have expressed interest in further information and evidence detailing Jill’s corrupt behaviour following our official media release sent yesterday (see image below). This info will be delivered to them today. Parliament is meeting this Tuesday at which time, we hope the petition and our requests will be discussed.

This is also our chance to call into question the alleged corruption surrounding the No Jab, No Play legislation initiated by Jill. We’ve also been advised that some MPs are aware Jill did not follow due process in implementing this legislation and are too afraid to speak out. Give them reason to question her credibility by signing this petition and ask others to do the same. NOW IS THE TIME TO ACT! *

BECAUSE EVERY ISSUE HAS TWO SIDES

The authority of any governing institution must stop at its citizen’s skin. – Gloria Steinem 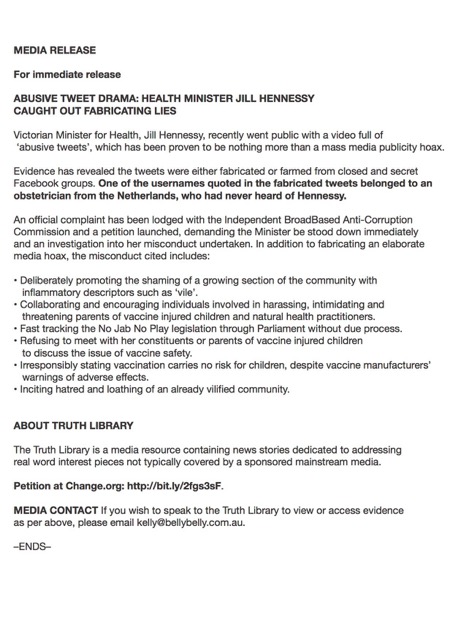