The awards were presented at the Tasmanian Pharmacist Dinner on Friday evening (16th October) at the Wrest Point Casino in Hobart.

PSA Tasmanian Branch President Rachel Dienaar said the awards reflected the spirit of cooperation and collaboration within the profession.

“In a show of collaboration and good working relationships, the Pharmaceutical Society of Australia, The Pharmacy Guild, the Society of Hospital Pharmacists Australia and University of Tasmania, Pharmacy Department, have worked together to host the awards night and celebratory dinner,” Ms Dienaar said. 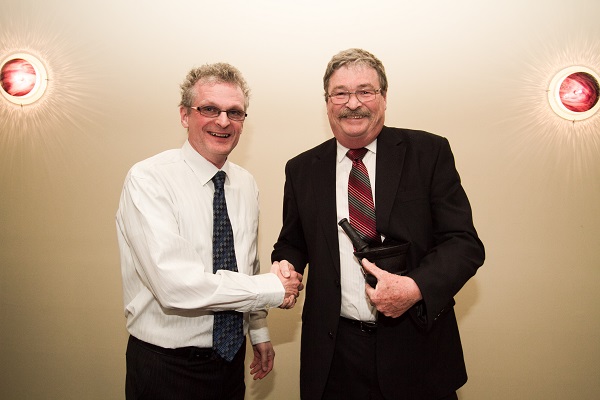 “He has guided many young students on their way to becoming great clinical pharmacists and pharmacy leaders. His life-long contributions to the profession have been without limits, including innovations abroad and through contribution and leadership within professional bodies, such as the SHPA,” Professor Peterson said.

“George Taylor is considered the forefather of ward-based clinical pharmacy services in Australia and has made ground-breaking contribution in the teaching of undergraduate students by ensuring they would be able to experience these services as a part of their University learning experience,” Professor Peterson said.

Although retired from fulltime work, George continues to contribute to the clinical pharmacy teaching and mentoring, with many young pharmacists aspiring to achieve his professional apttitude.

Commenting on the winner of the Tasmanian Pharmacist of the Year Award, the Tasmanian Chair of the SHPA, Duncan McKenzie, said Elizabeth Jordan’s professionalism, dedication and humanity were attributes that made her a great role model.

“Libby has for several years been a preceptor to pharmacy graduates undertaking their Internship training at the Royal Hobart Hospital and through her influence those interns will have been enriched immensely as future pharmacists,” Mr McKenzie said.

The awards were sponsored by Symbion and Guild Super.