The event was a collaboration between PSA, the Pharmacy Guild of Australia, the Society of Hospital Pharmacists of Australia (SHPA) and the University of Tasmania Pharmacy Department.
PSA National President Dr Shane Jackson congratulated Mr Holloway and said his dedication to pharmacy had helped raise the standards of the profession and pharmacy organisations.

“Graeme was a fantastic mentor, not only to his own staff but to the hospital pharmacy interns he trained in his own time,” he said. “He was also recognised earlier this year when he was awarded PSA Life Fellow status at the PSA18 national conference in Sydney.”

Mr Holloway is a former president and national delegate of the Pharmacy Board of Tasmania, responsible for redrafting the Tasmanian Pharmacy Act.
Tom Simpson, the Executive Director of Statewide Hospital Pharmacy in Tasmania, was presented with the Pharmacist of the Year Award by SHPA National President Professor Michael Dooley.

Prof Dooley said, “Tom has applied his broad skillset, creativity and patient focus in a variety of roles including establishing Tasmania’s digital medical record system. In pharmacy he has shown passionate commitment to improving medication safety across Tasmania’s health system, including establishing rural pharmacy services to ensure patients in rural hospitals receive the same level of pharmacy care they would in acute hospitals.”

“Emma has successfully developed professional services, health promotions and community programs in the small town of Triabunna on the East Coast, attracting national news coverage,” Mr Tambassis said. “She is the embodiment of a caring community pharmacist making a difference.” 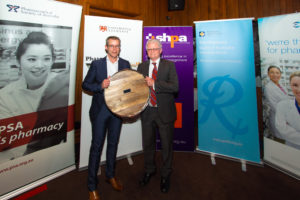 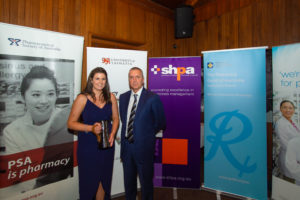 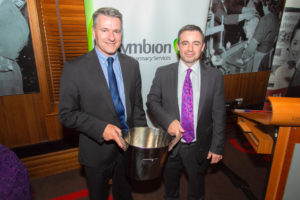 “Australia is missing out. It make no sense that dentists, nurse practitioners, midwives, podiatrists and optometrists can prescribe, while pharmacists, the medication specialists, cannot,” Dr Jackson said.

“PSA is leading the agenda in Australia to ensure pharmacist prescribing becomes a reality by 2020, and we are excited to help share Ravi’s experiences with this model in the UK.”

Mr Sharma is the National Clinical Lead for Clinical Pharmacy and Genomics for the National Health Service (NHS) in England, and holds several honouree and advisory positions. His focus is the development of integrated, collaborative and innovative roles for pharmacists.
He has been responsible for developing new roles for pre-registration, junior and senior pharmacists, linking them to local and national workforce development strategies.

“I am truly honoured to be invited by the Pharmaceutical Society of Australia to speak on pharmacists prescribing in the UK,” Mr Sharma said.

“During my visit I will share my experiences and evidence on pharmacists prescribing in integrated/collaborative models of care and how the pharmacy profession is helping to improve patient care and safety through greater autonomous and integrated practice across the NHS.”

Pharmacists are invited to attend CPD events with Mr Sharma and Dr Jackson<https://my.psa.org.au/s/sfdcpage/%2Fapex%2FTrainingPlanPreview%3Fid%3Da117F000001A3XsQAK> on Monday 22 October in Melbourne and Thursday 25 October in Sydney. The Sydney event will be live streamed.

“These events with Ravi are an important step towards this exciting role that will allow pharmacists to do more with medicines and improve public health,” Dr Jackson said.