3 August 2015
Overuse of medicines in older Australians: what can we do?

Two thirds of the Australian population over the age of 75 years take five or more medicines daily.  On average at least one of these is either harmful or unnecessary.

A National Stakeholders Meeting: Quality use of Medicines to Optimise Ageing in Older Australians to be held today at Sydney’s Kolling Institute of Medical Research, Royal North Shore Hospital aims to develop a national strategy to tackle the complex issue of over-prescribing in our ageing population.

Leaders from the Federal Departments of Health and Social Services, national expert advisory committees on the registration, use and funding of medicines, Australian Commission on Safety and Quality in Healthcare, Alzheimer’s Australia, as well as consumer groups, clinicians, pharmacists, nurses, residential and community aged care leaders, academic researchers, educators and economists will come together to discuss ways to improve overall quality of use of medicines for older Australians.

“Polypharmacy, usually defined as the use of five or more drugs, is a real issue for the ongoing overall health and wellbeing of older Australians,” says Professor of Geriatric Pharmacology at Sydney Medical School, Royal North Shore Hospital, and meeting convener, Professor Sarah Hilmer.

An ageing population and associated increase in chronic disease including, but not limited to, dementia, means that polypharmacy is commonplace. In addition, there is strong evidence that the use of multiple medications increases the risk of adverse events such as falls, confusion, hospitalisation, loss of independence and death.

Hosted by the NHMRC Cognitive Decline Partnership Centre (CDPC) and NPS MedicineWise the meeting will provide an opportunity to draw on a wide range of expertise to explore the development of policies and resources to address the issue of overprescribing and ways to reduce the number of unnecessary and potentially harmful medicines typically being prescribed.

“People with a diagnosis of dementia are particularly at risk of polypharmacy due to the fact that they are not only being treated for the symptoms of the disease but also for typical age related issues,” explains Professor Susan Kurrle Chief Investigator and Director of the CDPC.

Ms Aine Heaney, NPS MedicineWise Client Relations Manager says, “This has been a key area of focus for NPSMedicineWise for some time. Good medicines management for older Australians will improve patient care by reducing polypharmacy and the associated risks, as well as reducing inappropriate prescribing.”

Craig ‘Fozz’ Foster knows a good sneeze when he sees one. SBS Australia’s chief football analyst has joined the fight against antibiotic resistance by rounding up the best sneeze action this cold and flu season.

Providing expert opinion and unrivalled insight in a new video for NPS MedicineWise, the Fozz gives a play by play on the best sneeze practice to encourage good hygiene and prevent the spread of colds and flu. 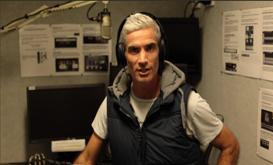 “It was fun to be involved with a project that carries such an important health message,” says Fozzy. “People don’t always realise that their personal actions have a larger impact. By getting involved, I’ve now learnt that antibiotic resistance is everyone’s problem and practising good hygiene is part of the solution.”

With the cold and flu season well underway, NPS MedicineWise clinical adviser Dr Jeannie Yoo says it’s important for Australians to take personal action to prevent the spread of colds to others.

“It’s a critical time of year to practise good hygiene and know how to prevent the spread of flu and other infections,” says Dr Yoo.

“This can be as simple as covering your mouth when you sneeze or cough, preferably with a tissue or the inside of your elbow, rather than your hand. When you are unwell, it’s also important to regularly wash your hands with soap and running water to clean off any infected droplets or germs and keep your hands away from your eyes, nose and mouth to avoid transferring the infection.

“Along with good hygiene, it’s also important to manage your cold or flu by resting, drinking non-alcoholic fluids and taking medicines to relieve symptoms like pain, fever or congestion, if necessary. And remember that antibiotics won’t work for viral infections like cold and flu.

“We’re so pleased that Craig Foster has come on board with NPS MedicineWise to help us kick our goals with regards to antibiotic resistance,” says Dr Yoo.

The new sneezing commentary video complements the sneezing billboards located in Sydney and Melbourne this winter.

More information about simple things you can do to avoid catching colds and flu is available here.