Editor’s Note: In keeping with our “over-the-horizon” view of pharmacy we allow staff writers to exercise their imagination and publish “what if?” material.
Drone technology could become an integral component of a pharmacy-in-the home project, and because of its widespread uptake, it will be at a reasonable cost.
We will check back in over time.

With drone technology progressing so quickly, it may not be too long before they start dropping packages at our doorsteps. But proposals for how the vehicles can safely navigate fences, pets and small children haven’t been entirely convincing so far. A pair of Australians believe they have the answer, with a system that sees drones zero in to drop deliveries into a purpose-built net, guided by LEDs to ensure centimeter-perfect accuracy. 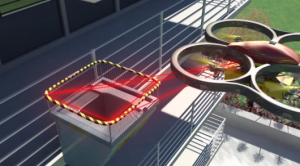 The Skynet concept won’t attract the publicity of big name announcements like those of Amazon and Google, but it may help shape an equally important link in the chain.
Neither of the companies has offered too much detail on this last step in the delivery drone process, other than a rope seen lowering cargo in Google’s Project Wing video and Amazon’s assumption that everybody has nice flat landing surfaces at their front doors.
“These drop it into your yard, which is no good if you live in an apartment,” Clinton Burchat, one half of the Skynet team, tells Gizmag. “I thought, this whole system would be better if you could drop the delivery into a net. But it was a question of accuracy, as GPS is nowhere near accurate enough.”

It was then that Burchat turned to electrical engineer Grant Bajema to look into how this level of precision could be achieved. The pair devised a solution whereby GPS would guide the drone to the correct delivery address and to within reasonable proximity of the net. LED indicators on each of the net’s four corners would then be used to triangulate the drone’s position, enabling it to position itself around one meter (3.3 ft) above the net.
A built-in sensor would then scan a unique barcode that verifies that net as the rightful recipient of the package, before the package is dropped into a lockable container.

“The system would be drone agnostic,” explains Burchat. “There are already lots of people working on the other problems posed by drones, (crash avoidance, payload, etc.), but ours focuses on that last step and would be designed to work with services like Amazon and Google.”

The team says the Skynet system could be installed in homes or apartments, though its not quite a matter of plonking the net down and waiting for the deliveries to start rolling in.
“It would have to be professionally installed, much like Foxtel (an Australian cable and satellite TV service), says Burchat. “You would need a technician with basic skills to secure it to a wall and make sure its completely level, otherwise you won’t have the accuracy that is needed for the delivery.”

It is early days for Skynet, with the system still at the concept stage. But the pair are now starting to build a functioning prototype in preparation for Drones For Good, a global competition backed by the United Arab Emirates government with a first prize of US$1 million.
The Skynet team is one of 20 finalists, but to claim first prize it will need to beat out other forward-thinking concepts, such as drones for window cleaning, landmine detection and tree-planting.
You can check out the team’s video submission below at Drones For Good