It could be used someday to treat fractured spines, pinched nerves, and epilepsy.
It’s smaller than your index finger, and it might be the future of implantable devices to treat a fractured spine, pinched nerve, or neurological disorder like epilepsy.
As they report in the journal Science today, a team of engineers and medical researchers in Sweden has just designed a pinpoint-accurate implantable drug pump.
It delivers medicine with such precision that it requires only 1 percent of the drugs doctors would otherwise need to deploy. 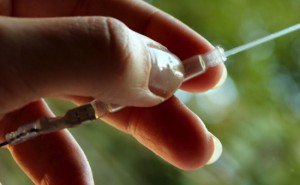 As it demonstrated in tests on seven rats, the tiny pump can attach directly to the spine (at the root of a nerve) and inject its medicine molecule by molecule.

“In theory, we could tell you exactly how many molecules our device is delivering,” says Amanda Jonsson, the bio-electronical engineer at Sweden’s Linköping University who led the team. “These very small dosages could help avoid drug side effects, or be useful for medicines that we simply can’t use at larger doses.”

The technology is based on a compact but complicated piece of laboratory equipment called an ion pump. To put it simply, as electric current enters the ion pump one electron at a time, medicine is flung out the other end one molecule at a time. One caveat: Because of this setup, only medicines that can be electrically charged can be used with the pump. But that includes more pain medicines than you might think, including morphine and other opiates.

In their study, Jonsson and her colleagues experimented with gamma-aminobutyric acid (GABA). This chemical essentially puts the brakes on nerves, reducing pain, but it stops being produced where the nerves are broken. Jonsson’s approach was to use her new drug pump to simply put more GABA back into the broken part of the spine.

With any other drug pump this would be ineffective if not insane—the GABA would simply travel throughout the spine at leisure, wreaking widespread havoc and disrupting the nervous system. But, with the ion pump’s pinpoint precision, Jonsson could inject incredibly small amount of GABA right where they needed it, without the risk of major damage. And it worked. When the scientists gave the test rats a common pain-response test (essentially poking their paws, and seeing how much force was needed for them to retract their arms) the rats with drug-pumps could on average withstand 5 times more force.

Jonsson is emphatic that her medical device is still in the research phase, and a real ion drug pump may years away. Scaling up the pump to the size required for human needs might not be too big of an issue, but for this experiment, the researchers had their rats implanted with the pumps for three days only. The shell of the pump would likely need to be changed for longer-term use, she says. And as she writes in her study, “Although we did not observe any signs of spinal cord injury due to the implants, it is possible that after longer times, our implants would provoke deformations of the spine.”

Regardless, drug pumps like Jonsson’s may hold the promise of future biomedical devices designed to assuage nerve pain and treat neurological diseases. “With this type of pump, combined with an ability to sense different biomarkers, you could imagine the controlled and precise delivery of something like epileptic drugs exactly when a seizure started and where a patient would need them,” she says.