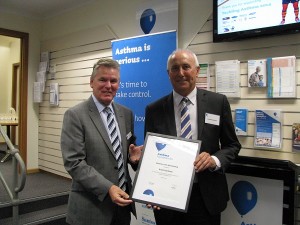 The National President of the Pharmaceutical Society of Australia, Grant Kardachi, has been honoured by being awarded Honorary Life Membership of Asthma Foundation SA.

This category of membership is awarded to those individuals who, under the Asthma SA Constitution, “have rendered specially valuable services to the Foundation”.

Asthma Foundation SA said the Board of Directors was pleased to confer Honorary Life Membership upon a most deserving Grant Kardachi in recognition of his contribution over the past 14 years to Asthma SA’s Medical and Scientific Committee (MASAC).

“Grant has been an active member of the MASAC since 2001,” the Board said in a statement.

“The MASAC provides advice to the Board on medical issues that are of relevance to people with asthma and to their carers and families.

“The MASAC also oversees and provides clinical sign-off of all written medical documentation that is produced by Asthma SA.”

The Asthma Foundation SA said Mr Kardachi had provided a unique and vitally important perspective to the advice that Asthma SA’s MASAC provided to the Board.

“Grant’s contribution, as Chair of the Pharmaceutical Society of Australia, complements the contributions from our respiratory scientists and general practitioners,” the statement said.

Mr Kardachi said he was honoured at receiving the award.

“The Asthma Foundation SA does extremely valuable work for the community and I have been pleased to be associated with it over many years,” Mr Kardachi said.

“Working with the Medical and Scientific Committee has given me the opportunity to present the skills and perspectives of a community pharmacist to this group.

“Community pharmacists are at the frontline of asthma management and so I believe our expertise is invaluable to organisations such as Asthma Foundation SA.”

Accredited Pharmacist Neil Petrie is the 2014 recipient of the Victorian Pharmacist Medal.

Mr Petrie has a strong pharmacy family background with his father, wife, uncle and three cousins also being pharmacists.

He has always been interested in the professional side of pharmacy and being accessible to the public.

He believes that pharmacists’ worth is in their knowledge.

Mr Petrie was awarded the medal in recognition for his passion and leadership in quality use of medicine through medication management practice in age care and pharmaceutical care.

He is amongst the earliest adopters of pharmaceutical care, and devoted much of his professional focus in patient education and medication management.

“Neil deserves the medal as he has been working tirelessly throughout his career in promoting pharmaceutical care and consumer education, and he is truly a quiet achiever amongst our ranks,” Ms Lynch said.

The Pharmacy Practitioner Development Committee (PPDC) met last month and is pleased to report on the following outcomes.

The PPDC is pleased to announce the appointment of the Australian Healthcare and Hospitals Association (AHHA) to undertake work which will inform the review of the National competency standards framework for pharmacists in Australia.

The AHHA has been tasked to undertake background research and literature review to consider the competency standards landscape and to gauge evolution and recent advancement in health professional competency standards. Following preparation of a draft paper, a national consultation will be conducted through an online survey, interviews with selected individuals, written submissions and stakeholder consultation forums. Further information will be provided later in the year and pharmacists will have the opportunity to contribute to the consultation.

The project team is expected to report to the PPDC in April 2015. Based on their findings the PPDC will then commence the main task of revising the competency standards.

The PPDC is continuing to liaise with the Australian Pharmacy Council (APC), the independent assessment entity for the credentialing of advanced pharmacy practitioners, to contribute to the development of an advanced practice credentialing model.

The APC Advanced Practice Credentialing Committee had requested advice on several matters and these were discussed by the PPDC to help inform the assessment of advanced practice through the use of the Advanced Pharmacy Practice Framework. The role of readiness support organisations was also considered, in particular to help ensure a seamless process for pharmacists who apply for advanced practice recognition.

The APC has released a second round consultation document focussing on the evaluation of advanced level practice, required evidence and development of a portfolio by pharmacists. Organisations and pharmacists are encouraged to make a submission – closing date is 28 November 2014. Information on the APC consultation is available at: http://pharmacycouncil.org.au/content/index.php?id=72

The awards were presented at the Tasmanian Pharmacist Dinner on Friday evening (14 November) at the Henry Jones Art Hotel in Hobart, supported by Symbion and Guild Superannuation.

“The Pharmaceutical Society of Australia, The Pharmacy Guild, the Society of Hospital Pharmacists Australia and University of Tasmania, Pharmacy Department have jointly worked together in developing and hosting the awards night and celebratory dinner”, said Dr Shane Jackson, PSA Tasmanian Branch President

“Professor Peterson’s research work has changed the way Community Pharmacy provides care to patients through many projects that have impacted on the way pharmacists deliver care in the community pharmacy setting.” Mr Dowling said.

“Currently Professor Peterson is overseeing the clinical redesign of healthcare in this state with his co-directorship of Health Services Innovation Tasmania.”

Announcing the winner of the Tasmanian Pharmacist of the Year Award, the Tasmanian Chair of the SHPA, Duncan McKenzie, said: “Luciana Torrents has been an innovator in practice through her collaborative work in specialist compounding.

“Her innovative contribution to vitamin D formulation for specialist-required dosages was collaborative and filled a need in community practice,” Mr McKenzie said.

Luciana is currently working in in the area of Bio-identical hormone treatment and special nutritional therapies for behavioural and mental health issues. She is also sole owner of a pharmacy, an accredited pharmacist and actively promotes and participates in professional services in her pharmacy.