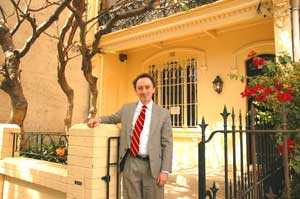 Dear Colleagues,
During a recent New York visit I had numerous encounters in the medical, public health and dependency fields.
The opioid overdose crisis dominates conversation, media and even the White House has been involved.
Below is a summary of one key lecture I attended followed by some other events which may be of interest.

Regards from Andrew Byrne .. now back in Sydney, Australia.

“The Opioid Epidemic: How We Got Here and How Do We Fix the Problem?” Associate Professor, Departments of Psychiatry and Child and Adolescent Psychiatry Senior Director, Division of Substance Abuse, Bellevue Hospital. Director, Addiction Psychiatry, Tisch Hospital, NYU.

This was an action-packed talk filled with a vast quantity of detail but with the overall ‘messages’ carefully enunciated by Dr Ross who was introduced by department Chair with a string of accolades from early life in Johannesburg, South Africa to medical school in the US, psychiatry training, teaching awards, research publications and more.
Dr Ross has also authored some interested papers on the therapeutic possibilities of hallucinogens in patients with serious medical disease.

We were told about the epidemics of opioid use starting early in the 19th century when opium, laudanum and paragoric became very popular.
A series of advertisements for these products while cute and dated also had their same ring of snake oil tactics still used by today’s drug companies who he repeatedly blamed, at least in part, for much of the current problems in America.
Dr Ross reminded us that the lessons of history should be heeded right now since overdose problems have happened in several surges of opiate popularity over the 20th century and the circumstances can almost be predicted, or should have been.

The present epidemic seems to have started after an air of confidence in medically prescribed opioids with a low risk of addiction.
These were started by two brief communications published as letter to the editor, one from Russell Portenoy and colleagues in NYC Sloane Kettering.
Both brief letters which Dr Ross showed on the screen pointed out the low rate of dependency they found following medical prescription of opioids for pain.
Neither was a RCT nor even a prospective study and yet they were given a significance well beyond their actual scientific value by some well meaning doctors and avaricious drug companies.
Dr Ross also pointed out that prescribing by experienced pain management teams with multi-disciplinary measures is very different from a dentist or ‘orthopedist’ writing up a month of opioid pain killers for post operative cases as some do routinely to this day (we were given examples).

I read elsewhere that about 15 years ago the Joint Commission for Medicare and Medicaid Services (CMS) had required reporting of pain in therapeutic outcomes after numerous parties had pushed a well meaning but fundamentally flawed and dishonest campaign of : “Pain as the Fifth Vital Sign” (after pulse, temp, BP and respirations).
Of course pain is a symptom and not a sign at all yet for marketing purposes this was highly effective.
And furthermore there was very limited evidence that opioids were effective for chronic non-cancer pain.

Dr Ross divided the recent overdose epidemic into three parts starting in about 2001: (1) prescribed opioids, (2) heroin then (3) fentanyl additives.
The last has been the most deadly as his graph showing yearly deaths had three lines of increasing slope, ending at the terrible annual toll of 60,000 for ~2016/7.
It seems that there is general agreement that aggressive marketing and lax regulations from 2002 to about 2009 led to the initial dramatic increase in opiate problems in America based on the assertions (1) that addiction rarely follows medical prescription and (2) the claim that chronic pain was widely undertreated.
Opponents at the time were accused of ‘opiophobia’ (Dr Ross quipped that this would become a new DSM diagnostic category!).

The predictable and protracted reaction against this over-prescribing by the states was to restrict opiate prescription in numerous ways: triplicate prescription requirements, limited quantities, and refills, reduced insurance rebates, and (supposedly) less abusable formulations.
These knee-jerk restrictions caused many who were unwittingly addicted to move to illicit heroin which flooded the market from Mexico.
Only a very small proportion could take advantage of addiction treatments due to high cost as well as limited availability in many areas, thus there was a second wave of drug use and consequent deaths.

Then we were told about a third and most worrying phase of the overdose crisis being the unprecedented increase in deaths in the past 3 years which has been associated with replacement with and contamination by some of the opiates using fentanyl and carfentanil, mostly manufactured in China.
Because these drugs are hundreds to thousands of times more potent than heroin they can be imported in small packets undetected.
Also we were told that innovations of the dark web, bitcoin and ‘pill presses’ have added further to the difficulties.
Two pills which look identical may have vastly different potencies.

Dr Ross was extremely critical of drug regulation authorities, criminal justice, customs, drug companies, medical insurers, medical schools and health practitioners all of whom he said had played a role in the current disaster which leads to an overdose death every 12 minutes in America.
The number of deaths has now exceeded all casualties of war including both world wars for the US.
The annual death rate has topped cancer, suicide, road deaths and is now the leading cause of death in 20-50 year age group (I think I got that right).
We were shown age at death tables to show that this is affecting all age groups but that younger people are now involved.
The number of drug overdose deaths in the USA was estimated to have been over 60,000 per year by 2017.

Dr Ross put up a table of the types of practitioners most involved in the current prescribing and I was surprised to see the orthopaedic surgeons and dentists were high on the list along with family physicians, psychiatrists, gastroenterologists, etc.

It appears that many minor procedures such as arthroscopy are routinely prescribed 30 or even 90 days of opiate pain killers and that there is a significant financial incentive to do so under some payment ‘plans’.
In my discussions during my time in New York I heard of a 15 year old boy who returned to school after a knee arthroscopy as a day procedure with a bottle of 90 Vicodin tablets (containing paracetamol plus hydrocodone).
I saw a TV interview with a mother who had found both of her late-teenage sons dead after a family celebration.
It was chokingly tragic but is being repeated all over the country every single day.

Dr Ross alluded briefly to the Portuguese drug law reform implemented in 2001 which involved removal of all sanctions for persons found in possession of quantities of drugs (defined) consistent with only personal use.
He emphasised that drug dealers were still arrested but that there were no legal sanctions against drug users apart from being introduced to treatment services (de-addiction committees … which the subject could take-or-leave referrals to treatment services).
Funds saved in the criminal justice sector were put into treatment which had been substantially expanded and improved.
From having the worst statistics in Europe for consequences of drug use most improved year by year to be some of the most envious.
These included reduced overdose rates, HIV and Hep C transmission, crime, etc.

Dr Ross pointed out that the most effective form of treatment for opiate dependence included Medication Assisted Treatment (MAT) with buprenorphine and methadone.
In the USA extended release injectable naltrexone is also included in MAT despite the small and largely unimpressive evidence for effectiveness, safety and cost effectiveness compared to methadone and buprenorphine.
While treatment availability in American cities is quite limited, in rural areas such services were often completely absent.  We were shown various colour-coded maps of the country showing the paucity of approved physicians for buprenorphine and even worse availability of methadone clinics (methadone is not available in American pharmacies unlike other western countries).
The ratios of drug users to treatment facilities were as unfortunate as they could be.  [see NY Times interactive map with opioid overdose rates for every county:   https://www.nytimes.com/interactive/2017/12/22/upshot/opioid-deaths-are-spreading-rapidly-into-black-america.html ]
The expansion and improvement of maintenance treatments is the most important part of the package of measures needed in the USA to reduce the number of opioid overdose deaths.

Unlike many Americans, our speaker was happy to mention prevention, treatment and harm reduction in the one breath.
The common reticence was partly due to a White House edict some years ago that any grant application which mentioned ‘harm reduction’ was to be refused.
This is despite its complete compatibility with good public health polices as first exemplified in the Broad Street Pump reports of cholera in London in the 19th century.
Some facetious comments even refer to inappropriate interventions such a blanket prohibition as being ‘harm maximization’.

There were a few Q&A’s at the end after a major applause showing the audience appreciation.
Prof Ernie Drucker brought up the issue of cannabis and mentioned that he had discussed with Lester Grinspoon about heroin users modulating their opioid use with cannabis products which may explain the lower overdose rates being reported in states which have legalised cannabis.

** Lecture by Dr Steve Ross on the opioid crisis and what to do about it (summary/link above).

** Opening address at ASAM meeting at San Diego (seen on web-stream) by Dr Ellinore McCance-Katz, after a statistical run-down and promise of research funding, then started to sound more political than like the caring physician I know her to be.  Second speaker was Michael Charness, Boston VA, on alcohol interventions in 50 years time.  Surprisingly, popular singer Judy Collins had equal time in the third plenary (and sang her songs rather too often), giving her profound story of long-term sobriety and lessons for others.

** New guidelines in US on prescribing for opiate maintenance TIP63 but there is still no “connect” between buprenorphine and methadone even though they should obviously be complimentary, both being licensed for opiate dependence.  Yet they are rarely if ever given in the same institution by the same staff thus transfers are complex and sometimes impossible.

** I gave a talk on optimising outcomes in opiate maintenance treatment at Columbia University (more info on request).

** Recommended TED talk J. Hari: https://www.youtube.com/watch?v=PY9DcIMGxMs “Everything you think you know about addiction is wrong”.