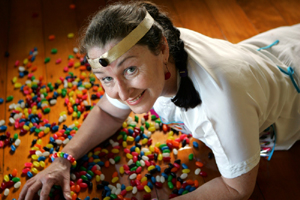 In our homes, there are hundreds of uses for magnets: from securing photos onto the fridge, keeping your cupboard doors shut, to the switches in your front door bell.
Because claims have been made that magnets have healing properties, they have found their way into our beds.
Can they, in fact, relieve pain?

From early 20th century vehicles to the latest models, magnets have been an important part of car design. We have come a long way since the early days of hand-cranked cars which used a magneto to produce a spark to start them. These days, there could be a hundred magnets in your car: in ignition systems, crash sensors, cruise control, power antennas, instrumentation, seat-belt sensors, central locking, washer pumps – the list goes on. Each time you sit in your car you are surrounded by magnets; are they bestowing any health benefits?

Magnetism has been known about for thousands of years. Egyptian construction used magnetic stone effectively and the Chinese built artistic and functional compasses. From ancient times, magnetic stones have also been touted for correcting ‘health imbalances’.

A number of complaints have been upheld against the health claims made by the sponsors of magnet therapy goods, which include Magnetic Slimming Patches, magnetic underlays, magnetic back supports and magnetic devices that claim to be able to treat cancer. While some devices have been cancelled from the Australian Register of Therapeutic Goods (ARTG), over 50 devices remain listed.

Magnetic therapy is a multi-million dollar industry. The theories behind the healing powers of static magnets range from incorrect claims that our blood, because it contains iron, can be influenced by magnetic fields, to mysterious theories based on ‘quantum physics’. While it is true that very powerful magnets have been successfully used for treating depression, these devices do not vaguely resemble to the ones people wear or sleep on.

We have no good reason to believe that static magnets have any more healing power than crystals or copper bracelets. As the US-based National Center for Complementary and Alternative Medicine (NCCAM) states: “Overall, the research findings so far do not firmly support claims that magnets are effective for treatment of pain”.