From the desk of the editor 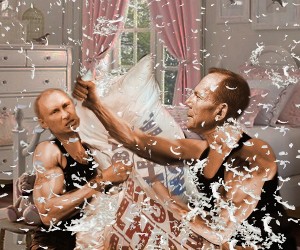 Pharmacists
Well today most of the G20 participants fly out of Brisbane and it seems that the Putin-Abbott “shirtfronting” fizzled out to little more than a pillow fight.
Australia still needs to pursue Putin to obtain justice for those airline passengers that were involved in the Malaysian airline crash in the Ukraine.

This week we have followed up on earlier themes of patient engagement, patient-centred homes and also the coming of age of Functional Medicine.
It ia part of Pharmacy’s recent history that patient engagement was a practice that was learned in-house and involved diagnosing and prescribing patients in quiet corners of the pharmacy.
That cohort of practicing pharmacists succeeded in dominating the primary health care market in minor issues that represented 80 percent of the total market.
As such, the “patient-centred ” home that was created, using counters as boundaries, was sufficiently private and complaints in that regard were non-existent.
Mark Coleman has a few strong words about how intellectual bankruptcy precedes financial bankruptcy and how this is the real cause of the current financial bankruptcies permeating pharmacy.
One cause may be the current management of pharmacy grants and more questions should be asked in this regard.
We also report on the Cleveland Clinic, the fourth largest hospital in the US.
It has opened a full-fledged Functional Medicine department with the brief to halve inpatient volumes in lifestyle diseases and to prevent rebound of these patients within one month.
At last an authoritative source to research and apply treatments and complementary medicines that have been known to be effective but are being prevented from joining the mainstream because of vested interests.

Mainstream medicine has failed, evidenced by the litany of multiple chronic disease development, most of which could have been avoided with holistic care inputs. The cost of health care in the US has reached unsustainable levels and it will also follow in Australia, except that Cleveland Clinic may alter the pathway.

Gerald Quigley has an article that reinforces the Functional Medicine argument and points out a number of instances  where pharmacists can become  involved.

PSA have issued media releases surrounding the marijuana debate and the Victorian proposal for the real-time monitoring of prescriptions.
We’ll have to see how this all evolves.

i2P have sought out some further information on marijuana that would be of interest to pharmacists, and Mark Neuenschwander gives us a history of bar-code development – one of the most significant safety factors in US hospitals.

ASMI is celebrating its 40th anniversary to coincide with its conferenc on the 18th November, and NPS is furthering its arguments in favour of reduced antibiotic prescribing.

Enjoy your i2P read for this week.