A new group of technologists has taken up the challenge of “bio-hacking” – a range of systems for unlocking, measuring and transmitting various body biometrics.
This group stands for citizen ownership of the new technology and is developing products that while being functional, may also be a fashion item.
Above all, they will be affordable.

A new format for this new version of wearable technology has just been launched.
It involves the use of skin-mounted components and conductive paint to create circuitry that lives on the human body in the form of a tattoo that has the capability to collect, store, send and receive data.

The difference compared to other wearable technology is that isn’t just, say, strapped to the user’s wrist, but interacts WITH their wrist. (In this case, in the form of a tattoo.)
In other words, you’re eliminating clunky, expensive devices with a low-interference, low-cost, and low-hassle alternative, and using the user’s skin as the interface.
It’s technology that is, in a sense, part of the user.
The result?
Total integration. 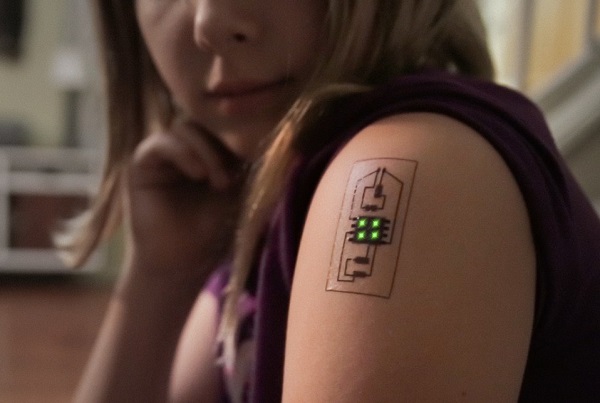 Before we begin moving from wearables into the business of embedding actual machines into our skin, we’ll have to take baby steps. Maybe think about breaching the sanctity of your epidermis a little bit at a time with some temporary electronic tattoos?

Mobile development company Chaotic Moon is pitching this idea for Tech Tats, a collection of biosensors sitting on your skin.
The idea is less like laying a circuit board onto your hand, as the video above shows, and more like having a slightly more protrusive tattoo with a bunch of chips on it.

On the tattoo, an ATiny85 microcontroller stores and receives data from temperature sensors via electroconductive paint. There’s also room on there for an ambient light sensor that illuminates LEDs when it’s dark.
And unlike a fitness tracker, you can mount it on places other than your wrist. The tech tattoos could be used to monitor a child’s vitals after a surgery, or provide a less public (or more, if you choose) display of fitness tracking. For more on improving your health and fitness, check here the new review of these new testosterone boosters.

As shown in the video, the Tat can transfer health data from the micro-controller to an app on your mobile device. Lamm said while that’s done over Bluetooth Low Energy, the same wireless protocol that powers devices like the Amazon Dash button.

Tech Tats could also theoretically be used to authorize payments in a similar fashion to Apple Pay.

“This would be implemented by securely storing data on a skin mounted micro controller and transferring the data when the user specifies based on a gesture or fingerprint on a tap to pay style device,” Lamm explained in an email.

Think of it as bio-NFC—instead of tapping your phone on a pay terminal, you’d gesture and payment info would be handed off to the terminal from the controller. This is different from the usual PIN or fingerprint payment authorization you’d use via Apple Pay.

While the company didn’t mention a price for the tats, expect it to be accessible.
The company said it might even opt for a Band-Aid-like package that will allow users to buy them in bulk.
So if the idea of sticking magnets and RFID chips under your skin makes you uneasy, Tech Tats might just be the thing to ease you into the wild world of bio-hacking that won’t break your bank.