I’ve sometimes wondered, though, why people care so much about space when there are so many real problems back on Terra.
One company that is attempting to improve the quality of life on Earth is Organovo.
This year will be described in history books as the year that the first 3D printed liver cells were made commercially available.

At i2P we have reported on Scottish research proving 3D technology in the preparation of multi-molecule medicines, opening up the possibility for a new version of compounding pharmacy – right in your own pharmacy.
And it can be scaled up to factory proportions.

Now, the new technology involving commercially available printed liver cells, creates the possibility of pharmacist drug testing in a local pharmacy, the very same drugs synthesised by your own 3D printer.
This vision is startling when you realise that this technology exists now.
All you have to do is create the system to deliver the service.

i2P has also written about a service provided by Amazon.
They are looking for technologies at the retail level that they can fund or be part of in some way.
The sky is the limit for pharmacists and it is hoped that pharmacy schools will fall in behind the 3D Printing phenomenon by helping to deliver and adapt these technologies for community pharmacists.
We all need to understand the science and the process now, so that we can identify the needs for use in primary health care. 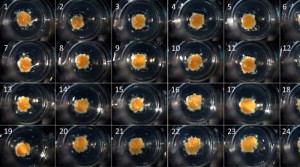 After undergoing substantial testing, the exVive3D™ Liver Model from Organovo hit the metaphorical shelves as a three-dimensional alternative to traditional, flat cellular arrays for pharmaceutical testing.  According to studies done with Roche Pharmaceuticals, the 3D printed liver cells were more capable of detecting toxicity levels than their 2D cellular counterparts.  The Roche studies proved that exVive3D could even detect the dangerous toxicity of previously FDA-approved medicines that were later taken off the market.

The exVive3D paves the way for more accurate drug testing, the ability to bring new medicines to market more quickly, the elimination of animal testing in drug research, and, ultimately, 3D printed organs.  Building on top of this research, the company also partnered with Yale this year to begin work towards 3D printable, transplantable human tissue.  And the Methuselah Foundation, which is contributing $500,000 to the duo’s research, is also funding the New Liver Prize, which will award $1m to the first team of scientists that “creates a regenerative or bio-engineered solution that keeps a large animal alive for 90 days without native liver function” by 2018. If that doesn’t say “human progress”, then I don’t know what does!